Community Wiki
Register
Don't have an account?
Sign In
Advertisement
in: Troy and Abed, Songs, Abed Nadir,
and 2 more 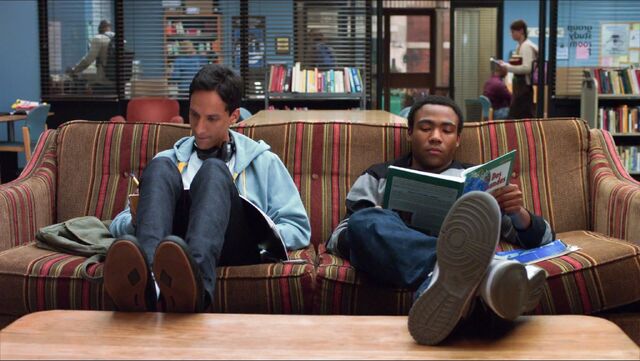 “101 Rap” is an improvised freestyle rap performed by Troy Barnes and Abed Nadir in their freshmen year at Greendale Community College. They were studying in Group Study Room F when Abed started beatboxing. Troy joined in by adding lyrics and the pair began alternating with spontaneous phrases and words they learned in Spanish class. Its first appearance was in the Season One episode “Spanish 101.” The scene in which the rap appears is the first end tag of the series. The rap is track number two on Community’s official soundtrack.

Where is the library?

My name is T-Bone, the disco spider.

Disco, doll, the library, is the big mustache, dog, lard.

Good day, I like cold potatoes, the goat’s mustache is Cameron Diaz!