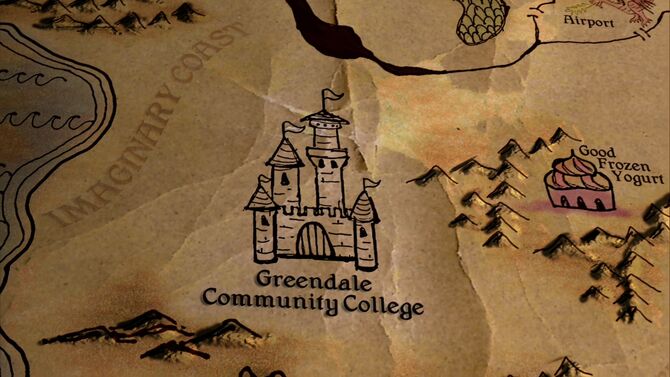 “I'd like to introduce myself to the group. Hello, I am a dwarf named Zippideedoo...”— Shirley
“Okay, I'm not the best at making up names.”— Abed
“Oh, hey, I'm Marrrrrr. Boy, you weren't kidding.”— Jeff

“Why are these goblins attacking us? Maybe these woods are their rightful land and from their perspective...”— Britta
“Ugh! You're the AT&T of people.”— Troy

“I'm sick of you threatening me and talking to me like a kid, and giving me that look you give like I can't get erections!”— Pierce
“What?”— Jeff

“I won Dungeons and Dragons! And it was advanced!”— Pierce Hawthorne

“You made up Fat Neil?”— Neil
“Someone asked where the restrooms were. You were standing by them, but you were also standing kind of near, uh, other Neil.”— Jeff
“So call him Skinny Neil.”— Neil
“He's not that skinny.”— Jeff
“He's bald! He's black!”— Neil
“I don't look at the world through that lens.”— Jeff

Retrieved from "https://community-sitcom.fandom.com/wiki/Advanced_Dungeons_%26_Dragons?oldid=71324"
Community content is available under CC-BY-SA unless otherwise noted.