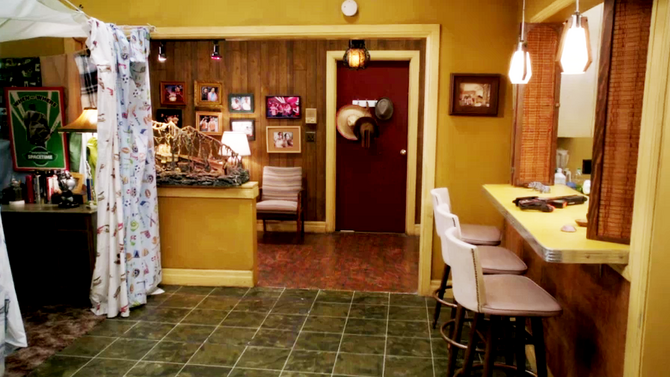 "Apartment 303" is the residence originally home to Troy and Abed which they moved into during their third year at school. The apartment is located at 3624 Dresser Avenue in Colorado and over the years has been the home to various members of the study group. Not long after Troy and Abed had their housewarming party Annie was invited to move in with them. In his fifth year at school Troy moves out to pursue an incredible opportunity. In her sixth year at school, a homeless Britta is invited by Annie and Abed to move in with them. The apartment's first appearance was in the Season Three episode "Remedial Chaos Theory".

The apartment is numbered 303 and is located on the third floor of the complex. It has central heating, is equipped with an intercom system to screen visitors, and has a fire escape. The apartment itself is a two bedroom residence with a kitchen, a dining area, a living room area, and one bathroom. Annie sleeps in the main bedroom, while a blanket fort is set up by Troy and Abed to be an additional bedroom. The second bedroom was used as a playroom called "The Dreamatorium" before Abed dismantled it in Introduction to Finality. This room was at first occupied by Troy, and, after he moved out, by Abed. The apartment is decorated with an Indiana Jones diorama, as well as various posters (see Abed's posters).

Pictures of Troy and Abed

Troy and Abed's apartment has framed photos of both of them together from various episodes from the first two seasons. From left to right, these include them in togas with Boob a Tron 4000 from The Art of Discourse (to the right of the bathroom door), in the first Troy and Abed in the Morning!, pajamas from Conspiracy Theories and Interior Design, bee suits from Celebrity Pharmacology, doing the special hand shake against a tropical background in red shirts, unidentified shot in a line-up in yellow shirts, random shot in the study room, cowboy outfits from Paradigms of Human Memory, togas before the food fight in The Art of Discourse, space suits from Basic Rocket Science, dancing in a disco and, togas again after the food fight.

Pictures of Abed, Annie and Britta

Beginning in Laws of Robotics & Party Rights, the pictures of Troy and Abed were replaced with pictures of Abed, Annie and/or Britta.

The apartment is numbered 303 as a reference to the difference in the production code and air number due to "Remedial Chaos Theory" airing after "Competitive Ecology" despite being filmed before. This may also be a nod to the area code, 303, which is used in Denver, the capital of Colorado.