In the study group's second year together at Greendale, Annie Edison was running for student body president. It was a hastily thrown together election by Dean Pelton necessitated by the imminent arrival of the Vice President who was set to visit the school. In a debate with Jeff, one of the many other candidates, Annie presented her plans as president if she won. One of her talking points included dealing with a campus terror who was assaulting students with coin slot shenanigans. Annie proclaimed she would bring to justice the assailant known only as the "Ass Crack Bandit." Even though she ultimately dropped out of the election, she never forgot about the Bandit and became obsessed with figuring out who it was ("Intro to Political Science").

For the next few years Annie secretly conducted an investigation with a particular theory in mind. She created a special file on the Bandit collecting various news clippings of their crimes. A number of people were suspected of being the ACB including the notorious "Fountain Pooper", but they were eventually cleared. The Bandit continued their crimes, now known as "cracking", even brazenly slotting three students during a Greendale and City College baseball game. All the while, school administration officially denied their existence. This led Annie to believe that a cover up was taking place and the culprit might actually be a faculty member. It wasn't until the study group's fifth year at school that Annie was given a chance to try and confirm her long-held suspicions.

After a year of no ACB incidents being reported, the Bandit struck again. This time their victim was Garrett Lambert who barged in on Shirley's Sandwiches grand reopening ceremony to alert everyone to the ACB's return. An emergency meeting of the "Save Greendale Committee" was held to deal with the matter. Pelton showed them a letter sent to him by the Bandit which stated that more "crackings" were going to occur. Professor Duncan was asked to join them as Dean Pelton hoped he could create a psychological profile on the Bandit. Feeling that her theory about a faculty member being the Bandit would be ignored, Annie asked Jeff to help carry out a separate secret investigation. He refused at first but changed his mind when Annie was kicked off the official investigation and he saw how much the cause meant to her.

Jeff determined that the culprit had to be a "Dave Matthews Band" fan as one letter the ACB sent contained many references to their songs. Searching Facebook, they came up with a short list of teachers who were fans. They eliminated all their suspects but caused major collateral damage during their investigation. Pelton punished them and told them to stop pursuing the case. It was then that the Ass Crack Bandit phoned Dean Pelton, mocking all their efforts to find them. After tracing the call to an extension at the campus stables, Jeff, Pelton and Annie rushed over there to catch the ACB. They were shocked to discover Alex "Star-Burns" Osbourne, whom they believed had died two years ago. Pelton had the formerly deceased student admit to being the Ass Crack Bandit in exchange for dropping the illegal meth lab charges Star-Burns faked his death to avoid. A large press conference was held to announce this, but while the rest of the attendees bought the lie, Jeff remained skeptical. Despite Annie's protest that he drop the matter, Jeff interrogated Star-Burns and discovered the deal he had made with Pelton.

Meanwhile, Annie started to believe that Ian Duncan was the actual perpetrator after learning he was a Dave Matthews Band fan and had a roll of quarters on his file cabinet. Duncan did not appear on the initial shortlist of "Dave" fans because he reveals he uses an older, British version of Facebook. She shared with Jeff her suspicions and found that he had discovered something significant as well. Inside a hallway closet, he found that the ACB's phone call was in fact a prerecorded message. It was on a laptop which was linked to a switch board that rerouted the call. When Annie tells Jeff about Duncan they rush off to apprehend him only to hear him get "cracked". The two see the real culprit rounding a hallway and give chase only to run into Shirley. When she informs them that Pierce Hawthorne just passed away, the pursuit is immediately forgotten. After Duncan, the "crackings" stopped and Star-Burns recanted his confession despite the school officially recognizing him as the culprit. No investigation on the Ass Crack Bandit is currently open ("Basic Intergluteal Numismatics").

Due to the locations and timing of previous attacks, Annie hypothesized that the bandit has access to the Faculty Lounge.

Both Britta and Professor Duncan attempted to shed some light on the Bandit's state of mind:

“The nature of the Ass Crack Bandit's crimes would suggest that he's angry or just fell in love.”— Professor Duncan
“We know that he hates money or loves it or doesn't care about money and hates butts or loves them.”— Britta

The bandit has provided several cryptic and possibly meaningless notes and messages. References to songs by Dave Matthews Band indicates the bandit may be a fan of the group.

Letter: "I am the Ass Crack Bandit. Humans make better banks than piggies. Whenever I get more change at the store I can't wait to drop it down your butts. I think I will go to the bank and get so much change and take all my dollars and make them into change and drop it all down there."

Note 1: "I hope you enjoyed my work again. You can't stop me because what are you going to do, not have butts?"

Note 2: "I am the mad hatter, if hats were butts. I am neither left nor right. I am the space between. To me you are all like ants marching to class, freaks on parade."

Could it be the Fountain Pooper? 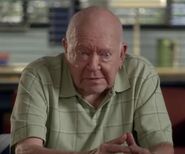 How accurate were Britta's psych profiles?

Is this a Freudian slip?

Does Abed watch crime shows for more than personal enjoyment?

Abed is sitting against the window during the start of the assembly...

The ACB strikes and Abed is gone. If Abed ran, wouldn't it have been to Troy?

What wouldn't Shirley do to succeed this time?

What happened in Professor Hickey's past...

...that still makes him smirk?

Is someone coming to get you?

Is Rhonda a little too good at "quarters"?

...or maybe it's you.
Community content is available under CC-BY-SA unless otherwise noted.
Advertisement