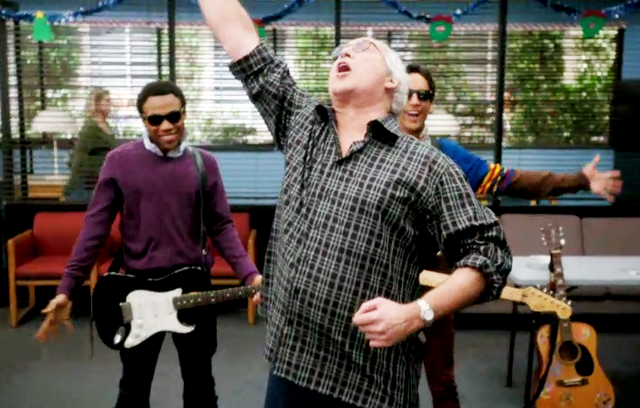 In "Paradigms of Human Memory", it was revealed that the study group filled in for the Glee Club when the previous members died in a tragic bus accident. When the latest club becomes incapacitated in "Regional Holiday Music," the study group refuses Mr. Radisson's request to replace them once more. Abed becomes his ally however and eventually manages to convince Troy to perform. They show up the next day in the study room, having rearranged the furniture and converting it into a practice area for the pageant. When the rest of the study group arrives, they target Pierce as the next to fall under the Glee spell ...

The lyrics were as Annie described: shameful pandering to Pierce's demographic. Baby boomers of Pierce's generation are usually very proud about their status in history as a special generation which helped to change the world. The song listed various accomplishments of baby boomers in both history and entertainment (although Troy and Abed get a lot of the details wrong). Pierce succumbs easily to the praise and is the third study group member to join. He is instrumental in convincing Shirley to join by using a children's choir to play on her personal vanity regarding her Christian beliefs.

Retrieved from "https://community-sitcom.fandom.com/wiki/Baby_Boomer_Santa?oldid=67787"
Community content is available under CC-BY-SA unless otherwise noted.