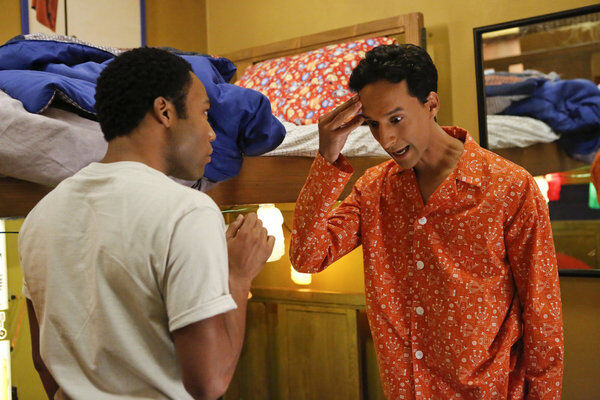 Troy and Abed are purposely messing up for a "gag reel" of their Freaky Friday experience while Jeff scolds them over it not being real. The Dean makes an appearance by running into the door. Abed informs him they are not doing the outtakes anymore. On the way out, the Dean runs into the door again and pronounces loudly his disappointment over really not doing the outtakes anymore.

Later, on the chalkboard behind Annie it says, "GCC 410. All books must be returned to Ms Drysdale @ the reception desk. All lost and found items will be taken to the student union bldg. You must have a valid student ID. Community Contest- It's not what Your Community can do for you, but what you can do for your Community. Write a short paper about your Community, what you like and what you would change if you could. One human does not a Community make...but one Human Being can make a difference. are you HUMAN ENOUGH? -ONE HUMAN BEING"

When the angle reverses, we can see that the white board has changed to read: "GCC 410. Study room schedules for this session are now available at the front desk. Additional forms may be acquired in the Student Union BLDG. Class schedules have been postponed until further notice. We are working to have this resolved by next Spring. Thanks for your attendance & continued support. The Human Being"