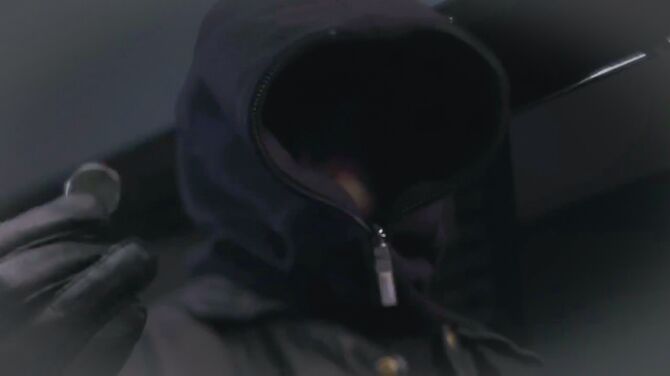 Star-Burns promotes his cat car idea as an environmentally friendly form of transportation in a crowdfunding promo video.

“Basic Intergluteal Numismatics” is a stirring paean to the everlasting humor of the word “butts.” (B+)”— Todd van der Werff

“As a parody of serial killer thrillers like "Zodiac," I thought it worked very well. The best "Community" parody episodes, though, function both as loving tribute to a particular genre and as a character study of one or more members of the study group; it was less successful on that front.”— Alan Sepinwall

“"Dark," by the way, is a literal thing in this "Community" episode. With a blue filter on the camera and a whole bunch of mood lighting, the show takes on a new identity. This makes sense though. When a criminal is sticking coins where the sun don't shine, there can be no true sunshine for anyone.”— Laurel Brown

“Season 5’s first focused “parody” episode was a standout installment of Community. The Seven/Fincher homages were terrific and hysterical and this will likely be one of the most quoted Community episodes ever among fans, with one awesome line after another...(9.5/10)”— Eric Goldman

“The Community writers are NEARLY there, but they’re still hesitant when it comes to completely committing to or developing the show’s romantic element. And whether you ship Jeff/Annie or Duncan/Britta or Troy/Abed for all I know, this unsatisfaction, this not-quite-there element WILL leave a tiny, gerbil-sized void in the series as a whole.”— Jennifer Marie

“Basic Intergluteal Numismatics" was a VERY funny episode of Community, and what more can you ask for?”— Tim Surette

“Though parody episodes have been a TV staple for longer than anyone reading this has probably been alive, no one executes them with the fervor and all-around excellence of Community. Those same qualities that sometimes work against the show - that obsession with detail, that willingness to reach conceptually far beyond where any sane TV writer would go - pay off wildly during these kinds of installments. (4.9/5)”— Gabrielle Moss

“It’s lucky I’m easily amused by jokes about the buttocks because quite a lot of this episode rides on them. For peop”le unlike me, I could see this episode being a completely alienating experience—Community finally managing to too heavily indulge in its immature side. But to you I say: have you no heart? Or at least no place in your heart for butts?

“Not to say “Basic Intergluteal Numismatics” isn’t a funny or enjoyable episode of Community, but there’s so many homages and stories crammed into the final ten minutes, there isn’t enough time for anything to breathe – and ultimately, buries two-thirds of the cast in the background for the entire episode, with nothing to hang its hat on besides its butt jokes and tired Jeff/Annie material.”— Randy Dankievitch

“Despite the dark and serious nature of "Basic Intergluteal Numismatics" it is still very funny.”— Jerome Wetzel

“What continues to please me about Community after so many years, after all the acknowledged and well worn ups and downs, is that when the show just goes right down the pop culture rabbit hole, and I mean really burrows deep and just owns it and has fun, it goes to a place of such joy, a special place for us die hard fans, the ones who held on.”— Ben Umstead

“Although it’s odd to get something this stylized this early in the season, concept episodes are what Community does well. (8/10)”— Sarah Shachat

“Still, while “Numismatics” ended up being a big old mess, at least it was Community, with strange jokes and references and more ideas than it could keep track of, rather than the undead beast that called itself by the same name last season...(6.7/10)”— Sean Gandert

“It’s thrilling (to see Annie and Jeff together again), scandalous (the underuse of the rest of the cast) and at times downright scary (DON’T TOUCH THE BEAR TROY) but most importantly it’s Community done right and that’s something everyone can enjoy...(B+)”— Jon Bowling

“It’s the juxtaposition that sells it—the decision to partner what might be the single silliest plotline in Community history with a parody of one of the most decidedly not silly filmmakers in Hollywood, the dour David Fincher...(7.7/10)”— Matthew Guerruckey

“The best concept episodes tie flawlessly into either a character arc or character dissection (see "Critical Film Studies" or "Pillows and Blankets"). This one doesn't quite achieve that level of perfection, but it certainly honors the genre with highly detailed and highly entertaining confidence”— Derek B. Gayle

“An amazing return to form by Community with a concept noir episode that is sure to be a classic. The only stain on an otherwise fantastic episode was a narrative shift in gear at the climax...(9.5/10)”— Jared Russo

“Otherwise, a solid episode that makes good use of Greendale's expansive supporting cast and earns lots of laughs from their more random character attributes. And ultimately it might inspire someone to see Fincher's Zodiac (which is his best film but also the lowest grossing), so it's a winner in my book.”— Brian Collins

““Basic Intergluteal Numismastics” is the perfect blend of everything we love about the show: it’s got humor and loads of heart adorned with loving and clever metatextual references to television and film.”— Britt Hayes

According to Zap2it.com, the episode was watched by 3.58 million viewers placing second in its timeslot behind The Big Bang Theory and seventh overall for the night. In the 18-49 age range it garnered a rating/share of 1.4/4.; this is an increase from the Season premiere which received an 18-49 rating/share of 1.3/4. viewers and ratings from the season premiere. The ratings were also an improvement up from the 3.49 million who tuned in the previous week.

Production for this episode used the title "What's in the Hat?" on its clapperboard. This follows the theme of hat-based puns throughout Season Five's production titles. 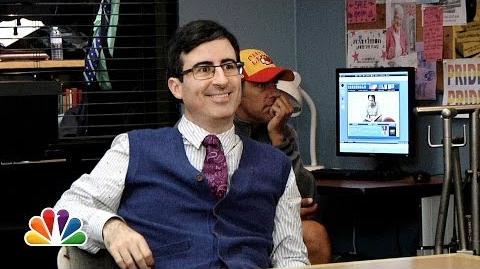 “I am the Ass Crack Bandit. Humans make better banks than piggies. Whenever I get more change at the store I can't wait to drop it down your butts. I think I will go to the bank and get so much change and take all my dollars and make them into change and drop it all down there.”— ACB letter

“I hope you enjoyed my work again. You can't stop me because what are you going to do, not have butts?”— ACB Note#1

“I am the mad hatter, if hats were butts. I am neither left nor right. I am the space between. To me you are all like ants marching to class, freaks on parade.”— ACB Note#2

“This is the Ass Crack Bandit. I find it funny that you ever thought you could catch me.”— ACB phonecall/recording

“I've enjoyed our game of cat and mouse. It's funny how close your two little helpers get to catching me. I liked watching them run in circles. Although sometimes I wonder, are they chasing me as an excuse to get near to each other? I mean, get a room already.”— ACB phonecall/recording

“I am the bringer of change. I am the filler of cracks.”— ACB phonecall/recording

“This is the biggest PR crisis to hit the school since we held that rally protesting the wrong Korea.”— Dean Pelton

“I am hereby banning change from this campus.”— Dean Pelton
“You really think that's an effective...”— Professor Hickey
“Well guess what. Your two cents is change, and it's banned.”— Dean Pelton

“The nature of the Ass Crack Bandit's crimes would suggest that he's angry or just fell in love.”— Professor Duncan
“We know that he hates money or loves it or doesn't care about money and hates butts or loves them.”— Britta

“Let me be like the fiftieth person at this school to ask, what is this, huh? What is this creepy business?”— Dean Pelton, referring to Jeff and Annie's relationship