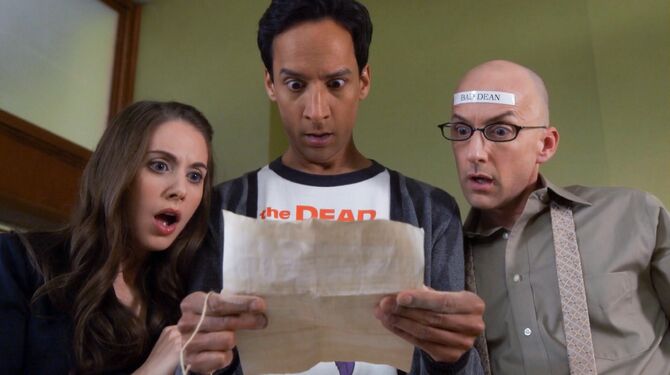 Buzz Hickey and Ian Duncan discover that they might share some history together from Hickey's time in the Army in England.

“BAD DEAN”, which he has called himself previously in other times of crisis. (He quickly tears it off when they find the note behind Borchert's portrait.)

•The dry eraser board behind Shirley and Annie reads:

“GCC 512/601”
“NOTE TO GREENDALIENS: ALL BOOKS MUST BE RETURNED BEFORE THE RAPTURE (but then RAPTURE is crossed out) END OF THE SEMESTER!”
“THIS SEMESTER MAY BE YOUR LAST CHANCE FOR A SCREEN CAPTURE!”

Next to a blank section is written:

During the same scene, on the blackboard behind Abed and Britta is a jagged zigzag line that straightens, mimicking a heart monitor in a hospital showing the patient flat-lining.

•As Chang is outside the study room eavesdropping on the study group discussing the buried treasure, he scrawls something on his notepad- which turns out to be the word

“TOMATO”. He is also still wearing his hand decorated T shirt which reads,
“I ♡ SUBWAY”

After Greendale is sold to Subway, Abed is wearing a Dead Alewives shirt. The Dead Alewives were an improv comedy troupe in Milwaukee, WI, of which Dan Harmon and Rob Schrab were members.

Retrieved from "https://community-sitcom.fandom.com/wiki/Basic_Story?oldid=70985"
Community content is available under CC-BY-SA unless otherwise noted.