Start a Wiki
Table of Contents:

Britta's original role within the group was to keep them focused on the goal of studying for Spanish without any distractions. Ironically when Annie took over as the taskmaster Britta herself became an increasing distraction. She would interrupt meetings to go on tirades about various injustices occurring in the world. Her uniformed and clueless rants caused her to be mocked within the group. The group would refer to her as "The Worst", a nickname which stuck throughout her time at Greendale. They would also start using her name to mean messing something up. 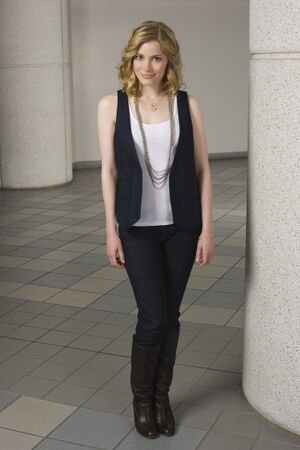 “Hit me with your genie's bottle, rub it all over me.”— "Custody Law and Eastern European Diplomacy"

“Together my cats can do anything!”— "Applied Anthropology and Culinary Arts"

“Me so Christmas, me so merry!”— "Regional Holiday Music"

“Abed, we're not formulas. And if I had no self-awareness I think I'd know.”— "Emotional Consequences of Broadcast Television"

Retrieved from "https://community-sitcom.fandom.com/wiki/Britta_Perry?oldid=70168"
Community content is available under CC-BY-SA unless otherwise noted.