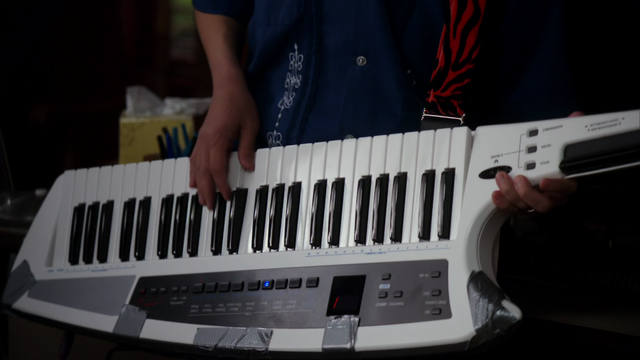 When Ben Chang is fired after his teaching credentials are revealed to be fake, he decides to take up his keytar again to pursue his love of music. In keeping with his self given nickname "El Tigre Chino", he has customized it with a tiger striped over the shoulder strap. Its first appearance was in the Season One episode "English as a Second Language". It makes a brief appearance in the Season Three episode "Regional Holiday Music" used by Troy. It is later featured prominently in the "The First Chang Dynasty".

He dedicated the keytar performance to his pre-birth victory against his twin sister Connie. As a tribute he played the song "Champion" by Korean artist Psy. The fireworks would be activated by his keytar when he played the last note of the song. The study group gets wind of his plans and Abed estimates they have only nine minutes before Chang finishes his solo. Using black light Dean Pelton installed in the hallways, the study group take out the security guards to the school's records room. Troy and Abed then diffuse the bomb seconds before Chang stops playing the keytar ("First Chang Dynasty").

In real life, Chang's keytar is a white RolandAX-SYNTH 49-Key Synthesizer. This retails for around $1200.

Retrieved from "https://community-sitcom.fandom.com/wiki/Chang%27s_keytar?oldid=60034"
Community content is available under CC-BY-SA unless otherwise noted.