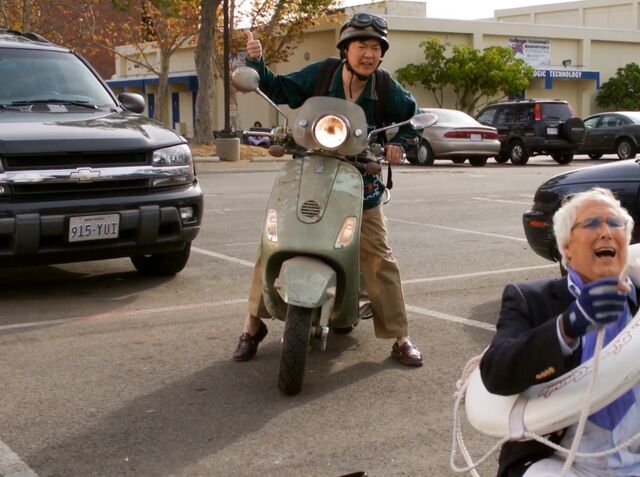 After Winter Break, Chang fools his students at the start of Spanish 102 into believing he died over winter break after he supposedly slammed his Vespa into an Arby's ("Investigative Journalism"). On Valentine's Day, Chang forces Troy and Pierce to wear lady pantsuits and escort him to the Valentine's Day dance at school. Afterwards, Chang invites Pierce to get frozen yogurt with him, and they leave on his moped much to Troy's disappointment ("Communication Studies"). Near the end of the school year, it makes its final appearance when Chang pulls into the school parking lot and Pierce is occupying his reserved spot, having just fallen off the "S.S.Nose Candy" during Sailing class ("Beginner Pottery").

A very similar looking moped (now correctly called a Vespa) is shown in the study group's fourth year at Greendale. It was driven by a potential student named Archie DeCoste whose wealthy family the school hoped would contribute to the school's coffers. This Vespa is painted a slightly different color and is decorated with City College decals. Archie reveals it was a gift from that school as they were also looking to recruit him as well ("Economics of Marine Biology").

Retrieved from "https://community-sitcom.fandom.com/wiki/Chang%27s_moped?oldid=58101"
Community content is available under CC-BY-SA unless otherwise noted.