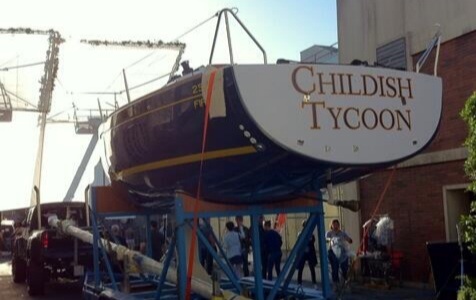 During the study group's fifth year at Greendale, Pierce Hawthorne unexpectedly passed away. After attending his funeral, his study group participated in an inquest into his death led by a Mr. Stone. Once it was over, Stone gave each member a liquid nitrogen cooled cylinder of Pierce's sperm along with some personal bequeathals. In Troy's case, he received an intriguing proposition as Stone told him that Pierce offered to give him his share of Hawthorne Wipes (valued at 14 million dollars). The catch was that Troy sail around the world in Pierce's boat called the Childish Tycoon. It was something Pierce's father had asked him to do when he was 23 in order to earn his fortune. However, Pierce never completed the task and instead floated off the coast of Belize on his boat doing coke with John Denver.

It was a rite of passage Pierce eventually regretted not going through with and he wanted Troy to have a chance to do what he never did: become his own man. Jeff objected saying the conditions of the will could be contested but Troy cut him off and agreed to do it. He admitted his decision had more it do with the millions he was offered, although he was moved by Pierce's last words to him ("Cooperative Polygraphy"). In the days that followed, Troy prepared for his boat trip as the study group, and in particular Abed, struggled to deal with his imminent departure. A campus wide game of "Hot Lava" was hosted by Abed as a way of saying goodbye to his friend. Once the competition was over, the study group gathered outside the library to wish Troy a fond farewell as a rig transporting the Childish Tycoon pulled up alongside the building.

After Troy and the study group said their goodbyes, Jeff asked if Troy was going to sail the ship all by himself. Troy replied that Pierce's will mentioned someone would travel with him as his co-captain to verify he doesn't cheat. LeVar Burton then emerged from the boat and invited Troy to come on-board. A shocked Troy did just that as LeVar placed a captain's hat on his head and saluted him. Troy looked back at his friends and waved goodbye as the boat slowly pulled out of the Greendale campus. Some time later, the Childish Tycoon was still on the rig as it made its way down the highway. Inside LeVar commented that starting a sea voyage from a landlocked Colorado was not a good idea. Troy stated that they would drive to the river and then take the river to the ocean. To pass the time, he then started asking LeVar various questions about "Star Trek" ("Cooperative Polygraphy").

In the episode "Analysis of Cork-Based Networking", Buzz Hickey is watching the news and on the ticker is a news item about LeVar Burton and his non-celebrity boating companion being taken hostage by pirates.

Retrieved from "https://community-sitcom.fandom.com/wiki/Childish_Tycoon?oldid=60418"
Community content is available under CC-BY-SA unless otherwise noted.