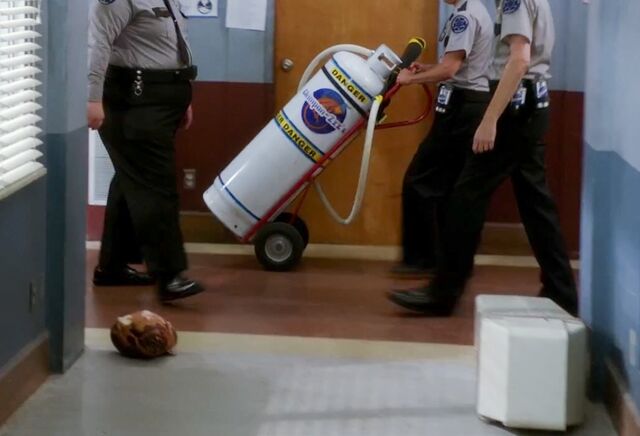 Chimpan-Zzz's
First appearance: "Biology 101" — Owned by: Greendale — Used by: Sgt. Nunez and Greendale security
Purpose: to smoke out monkeys.— Made by: unknown

In the study group's third year at Greendale, Dean Pelton decided that he would have a more serious year without any of the shenanigans that occurred in the previous one. He summoned campus security led by Sgt. Nunez to his office and informed them their main priority at the start of the semester would be getting rid of the monkey who had made the school's air vents his home. After being pressed for ideas on how to deal with the assignment, Nunez suggested they use some kind of monkey knock-out gas. The Dean approved and later Nunez and his men purchased a tank of "Chimpan-Zzz's".

Retrieved from "https://community-sitcom.fandom.com/wiki/Chimpan-Zzz%27s?oldid=60412"
Community content is available under CC-BY-SA unless otherwise noted.