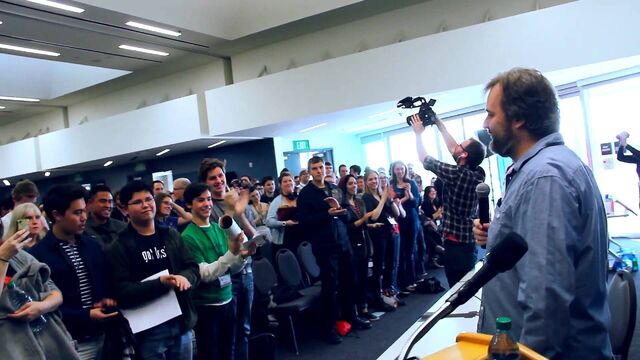 Event organizer Gillian Morshedi explained how she was inspired to create CommuniCon:

A tumblr site and twitter account were created specifically to help promote the event. Show creator Dan Harmon learned of the event, tweeted about it and also agreed to attend. He was given a live microphone and 90 minutes to talk and discussed the shows origins, his philosphy about what it and the fandom who have embraced about it and what he feels the show ultimately represents.

The event was held in Glendale, California at Los Angeles City College on February 9-10 on 2013. The site used was the LA campus where outdoor scenes of Community were filmed in Season One. Nearly 400 fans attended along with the guest of honor being series creator Dan Harmon. He appeared on stage answering questions along with a number of the show writers including Megan Ganz and Andy Bobrow. A few series regulars like Charles Koontz (Neil) and David Neher (Todd) attended. Yvette Nicole Brown (Shirley) and Gillian Jacobs (Britta) made surprise appearances at the event as well.

A second convetion was held on October 12-13, 2013 in Los Angeles, California at the Glendale Embassy Suites. A few months earlier a Kickstarter campaign was launched on August 7 to fund the event. $13,000 was needed within 13 days; the goal was reached in only 4 days and the final tally was $18,595.

This is a special video intro to CommuniCon 2013 created by Damien Barriga that was unable to be played at the event due to technical difficulties.
.

From Damien Barriga and Brittany Sterrett, "Intro to Communal Conventions" is an exclusive inside look at the amazing events that took place at the first ever Community convention. We invite you to witness a fandom unlike any you've seen before. Filled with cast and writer interviews, fan interviews, a conversation with the creator of Community himself - Dan Harmon, glimpses into the world of fan art and even a Community video game... this is a film Community lovers the world over won't wanna miss. Get ready to experience a whole new kind of documentary.

Because some flies are too awesome for the wall.

Retrieved from "https://community-sitcom.fandom.com/wiki/CommuniCon?oldid=42771"
Community content is available under CC-BY-SA unless otherwise noted.