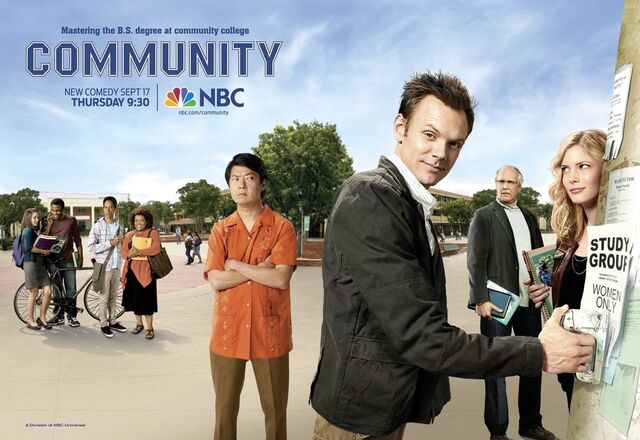 Dean Craig Pelton is the eccentric dean of greendale. He is played by Jim Rash.

The first season of the television comedy series Community originally aired from September 17, 2009 on NBC to May 20, 2010 in the United States. The first three episodes aired at 9:30 pm ET before being moved to 8:00 pm ET. The show was picked up for 22 episodes in October 2009 with an additional 3 episodes ordered by NBC bringing the total count up to 25. Before it's season finale aired it was announced on May 3rd that NBC renewed it for a second season.

Synopsis: In the study group's first year they are taking Spanish. Over the year we see the strong bonds that form between each of them. Jeff and Britta's flirtation continues. Troy and Abed's friendship start what will become an epic bromance and the beginnings of another possible romance is laid out as another one ends. As their freshmen year continues, the group take on the school bully and his minions ("Comparative Religion"), form a chicken finger mafia ("Contemporary American Poultry"), participate in the campus destroying first paintball assassination game ("Modern Warfare"). The semester concludes with The Tranny Dance where a love triangle ends with a shocking romantic cliffhanger ("Pascal's Triangle Revisited").

The second season of the television comedy series Community premiered on September 23, 2010 on NBC and aired on Thursdays at 8:00 p.m. ET as part of "Comedy Night Done Right" line up. On March 17, 2011, NBC renewed Community for a third season.

Synopsis: In the study group's second year they are taking Anthropology together. Jeff deals with the consequences of his actions at the Tranny Dance which leads repercussions for him throughout this semester. Pierce gets into an accident, breaking his legs. He grows dependent on painkillers and becomes alienated from the study group. His increasingly nasty behavior causes them to exclude him from their activities. The other members of the group secretly took a vote about whether they'd include him in the group next year, and only Annie voted to keep him in; by the end of the semester, the other group members have reconsidered and are willing to let him back in the group, but Pierce claims he's not interested in returning.

The third season of the television comedy series Community premiered on September 22, 2011 on NBC, and airs on Thursdays at 8:00 p.m. ET. NBC announced on May 10 the show was renewed for a fourth Season and Season Three concluded a week later on May 17.

Synopsis: In the study group's third year at Greendale, Jeff is in therapy, Britta has chosen her major, Annie finally moves out of Dildopolis, Troy is pressured to join a powerful secret society, Abed's grip on reality becomes tenuous, Shirley experiences a major change in her personal and professional lives, and Pierce deals with his father issues.

Retrieved from "https://community-sitcom.fandom.com/wiki/Community?oldid=50628"
Community content is available under CC-BY-SA unless otherwise noted.