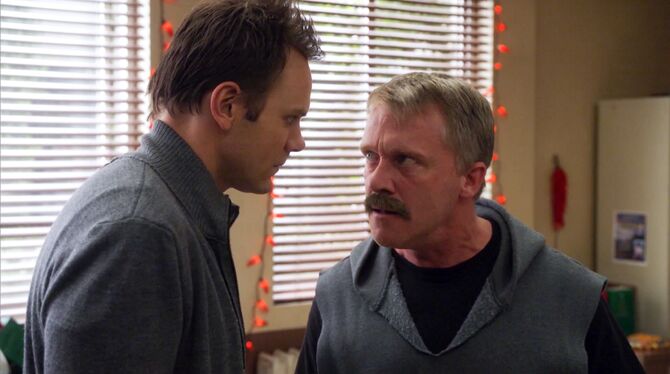 *Joel McHale discussed an incident that happened during filming of "Comparative Religion" in a 2014 interview he had with Aisha Tyler on her podcast "Girl on Guy". In the scene where his character Jeff was being trained by Pierce, Chevy Chase egged Joel to not pretend to throw a punch and actually hit the training mitt he was wearing. Although Joel refused to at first, eventually he claimed to have done just that which resulted in Chevy getting injured.

*After Mike bursts into Spanish class, Jeff Winger asks Ben Chang to stop him but he simply responds with "I'll allow it." A shot of this exchange has become a popular meme format.

“You're a funny man. Wanna hear something funny, funny man? Knock-knock. My fist up your balls.”— Mike
“Who's there?”— Jeff

“Then you look straight through his eyes, and deep into his soul.”— Troy
“And then you move to Vermont.”— Britta
“I am sick and tired of you saying that fighting is gay.”— Troy
“She's got a point. You know, in boxing you fight for the purse and the belt.”— Abed
“I've got to write a paper about that.”— Britta

“There's an old Buddhist saying in my vision group-”— Pierce
“You are not a Buddhist, you are in a cult.”— Britta
“Suck it, Nietzsche.”— Pierce