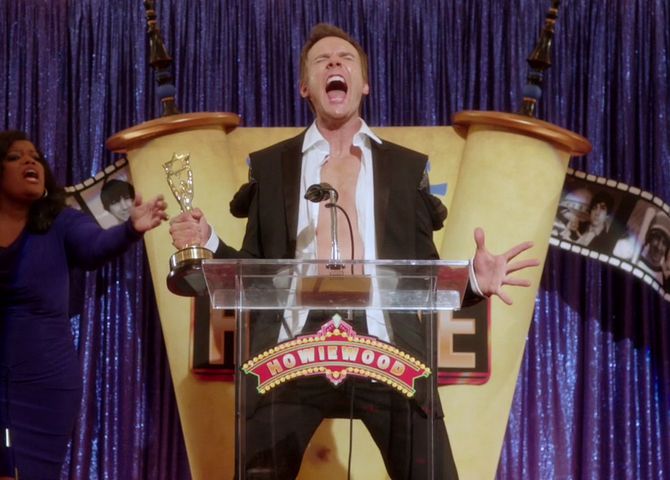 "HELP US HELP YOU! To avoid late charges on overdue books! If ya got a late book, bring it back A.S.A.P.! Thanks."

... and when we first see the whiteboard behind Annie and Shirley it reads in part:

" [top part cannot be seen]...card at the registration desk! And be "GREEN" this semester!" - Underneath the message is a simple drawing of a tall tree and a shorter tree. Then, moments later when Jeff enters later than everyone else, the same whiteboard has a different message, which now reads:

"New schedules posted in the lobby. If you need a schedule please see the receptionist at the front desk. -thanks. All scheduled time requests [illegible] with the receptionist. All request should be made at least 24 hours in advance." When the angle changes to show Annie and Shirley watching Jeff go to his seat (and through the end of this studyroom scene), we see the whiteboard again has the "GREEN" message with the trees drawing.

“Baby Ben got to be Baby Jesus in our church's nativity play, and Andre was Joseph, and Jordan was one of the wise men, and I was in charge of casting.”— Shirley

“What is this I hear about a tranquilizer gun? If you had hit a small student, they could have died!”— Dean Pelton
“I wouldn't do that. I have a heavy flashlight for them.”— Chang

“Maybe you can bring on some students as security interns. I'll let you offer them a credit in safety or math or something.”— Dean Pelton
“Thank you, sir. You won't regret this unless I rise up against you. I don't know why I said that.”— Chang

“I was thinking, you know that person that you study for your psych class? Maybe that should be me.”— Jeff
“Mm-mm. No way. You are way out of my league, diagnostically speaking. I'm gonna go with someone a little less complicated. Like Abed.”— Britta

Retrieved from "https://community-sitcom.fandom.com/wiki/Contemporary_Impressionists?oldid=71140"
Community content is available under CC-BY-SA unless otherwise noted.