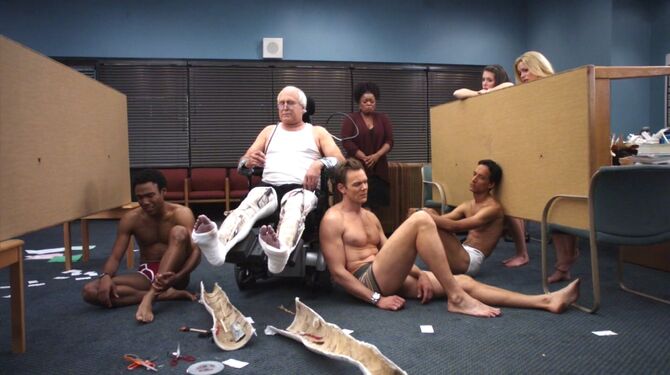 Andy Greenwald of Vulture wrote: "Thanks to the very clever, possibly purple, and definitely not missing pen of writer Megan Ganz, 'Cooperative Calligraphy' was fantastic, a wholly human and constantly creative delight that accomplished a ton without ever leaving the study room."

Todd VanDerWerff from A.V. Club called it "my favorite episode of Community in the series' run so far" and gave it an A. "What makes Community a show I love is that it doesn't forget that it needs to do episodes like 'Cooperative Calligraphy,' episodes where the plot is more of an excuse for the characters to hang out and toss jokes at each other or where the ultimate resolution (a monkey did it!) is almost incidental to the true point of the episode, which is about how the family you choose is sometimes more important than the one you were born into."

Drew Stewart of Television Blend says that despite being set entirely in the study room, the episode was "still as funny and captivating as ever ... thanks in whole to an excellent cast and probably the best comedy writers in TV today." He was also liked the amount of continuity it kept with previous episodes and, despite Dean Pelton's disapprobation, the controversial puppy parade float.

Kona Gallagher of CliqueClack was unfamiliar with the term "bottle episode" before this week. "Even though I missed Senor Chang, Starburns, and all of the other ridiculous characters on this show, it’s the core interactions between the study group that really make Community great, and we had that in spades." She also makes the point that while she understands why the women would feel violated by Abed's charting of their menstrual cycles, she enthusiastically endorses the idea of someone having chocolate available for her whenever she might need it. "If that was in the Patriot Act, I totally would have supported it."

Alan Sepinwall of HitFix writes, "I absolutely, 100 percent love the way Community both celebrates the last 30 years of popular culture and uses it to comment on the lives of the members of the study group. ... But it wasn't until I watched 'Cooperative Calligraphy' that I quite realized how much I missed the flip side of Community - the part of the show that's about how these seven people relate to each other, rather than them re-enacting moments from my favorite movies while Abed comments on them. And I'm glad we got back to that kind of humor."

Daniel Carson of the Houston Press Art Attack blog wrote: "'Cooperative Calligraphy' is destined to rank with the best episodes of Community's entire run, as well as one of the funniest half-hours of television this year." "Aside from the pure joy of seeing this ensemble work together so tightly on their own -- and it was a total joy, Mozart the way it was meant to be heard -- the episode's glorious commitment to pushing the TV envelope is what set it apart and made it a thing of beauty."

Rohan Ramakrishnan of ScreenCrave is not a fan of bottle shows: he finds them, "as a rule, pretty boring," and dislikes the "more and more outlandish reasons" such episodes must resort to to keep everyone around. But he concedes that "Cooperative Calligraphy" was "pretty much as good as a bottle episode ever gets." He liked Abed's menses charts, the subtleness of the call back to Shirley and Chang's dalliance in "Epidemiology," and the sweetness of Troy's ghost story.

Alison Dingeldein of the L.A. Times Show Tracker blog also seems not to be a fan of bottle episodes, but says "this one was pretty good." She was delighted to see the guys in their undies.

Noel Kirkpatrick of Monsters of Television, on the other hand, says in the very first line of his review, "I love bottle episodes." He thinks "Cooperative Calligraphy" was "one of Community‘s best episodes so far," adding that while Community is "brilliant" at "episodes of homages and meta and references ... in a way that I think no other show is, I love this kind of character-centric episode more." He provides a helpful link explaining the Gwynnifer joke.

Christopher Rosen of Movieline wrote: "after a season of outlandish stunts, it’s nice that Community finally dialed things down to a more personal level." He makes the point that what made the episode great was not just its focus on character, but that it brought all seven main characters together for the entire episode. "If there has been a flaw with Community during season two, it’s that too often the cast is isolated from one another. Community is best when the entire group is batting around their stereotypes together."

Jace Lacob of Televisionary thought the episode was so nice he reviewed it twice, once before the episode aired and again after. In the former, he called it "a reminder that Community can find the comedy in both the high-concept and the seemingly quotidian. In the hands of this inventive and imaginative series' talented cast and crew, zombie attacks and "space" travel can sit side by side with an entire episode about a missing pen. Heart and humor can co-exist quite nicely, thank you very much, as can pain and a puppy parade," and added in the latter that it was "not just a hilarious and accomplished installment but the very best bottle episode ever to air on television."

Time's James Poniewozik also reviewed the show twice. In his preview review, he says the episode "engages in a lot of the things I like least about the show—the constant calling attention to the TV-showness of it—but also shows off what I like most about Community: the interaction of well-drawn characters, acting out believably in an absurd situation." In his later review, he's more effusive, praising "amazing level of craft" the cast and crew bring to the show: "Dan Harmon and company just make the hell out of this show." He uses the on-camera theft of Annie's pen as a case in point, pointing out that not only did they go to the trouble of showing it, they actually had the monkey steal it.

Michelle St. James of Daemon's TV makes the same point: "whatever theme Community goes with, it goes all out." She also says, "as much as I love the special event episodes, and I so do, it’s episodes like this that demonstrate why Community is such a great show."

Zach Handlen of TV Squad writes that the episode was "beautifully constructed. It didn't reinvent the wheel, like other episodes have tried to, and there was very little homage or parody here. Instead, the ep was full of terrific character work and sharp gags, strengthening the relationships these people share. He also says that episodes like this are vital to the success of the episodes that rely more heavily on self-referential humor and pop culture references, because without "a strongly defined ensemble to provide an inherent reality to their universe", those episodes end up with "sort of a hollow feeling at the core."

The X-Files Reviews at The TV Obsessed gives the episode a 9.5 out of 10. The reviewer, while never coming right out and saying so, seems to prefer "the intense focus on the characters" in episodes such as this to the spaceship and zombie episodes, which were funny but failed to explore the "depth of the characters" and in which "some of the lines could have been interchangeable."

SooperpowerTV of TV Fanatic says it was "a treat to have the group back together in the study room for an entire episode." He or she observed that the group's decision to accept Troy's theory that a ghost took the pen could be "a hint from creator Dan Harmon and Co. that where the often 'out there' comedy of Community is concerned, sometimes the best thing to do is just relax, embrace the absurd and enjoy the ride."

Ratingswise, the episode pulled in 4.89 million total viewers in the fast overnights, with a 2.1 rating/6 share in the 18-49 demo.

“I want to see if those wiener dogs are born that way, or if they start off normal, and then get wiener.”— Troy

“If anything, this chair makes me more than human. You move it by blowing into this tube here. It's the most expensive one. I outbid three hospitals for this baby and it was worth every penny.”— Pierce

“Attention students, the Puppy Parade is starting on the quad. Better come quick, with every passing moment these puppies grow older and less deserving of our attention.”— Dean Pelton

“Side effects: Verbal dysphasia and octopus loss. I don't see anything on this squirrel about memory, Troy.”— Pierce

“Gwynnifer. Hi. Yeah, it's me. I can't make it. Well, tell your disappointment to suck it. I'm doing a bottle episode!”— Jeff, on the phone with "Gwynnifer"

“Okay if I could just take this time to share a few words of sarcasm with whoever it is that took this pen. I want to say thank you for doing this to me, for awhile I thought I'd have to suffer through a puppy parade but I much prefer being entombed alive in a mausoleum of emotions I can neither understand nor reciprocate. So whoever you are can I get you anything? Ice cream, best friend medal, anything? Okay, sarcasm over. You're last up Shirley. Dump your comedically huge bag and end this.”— Abed

“Have we not gotten to a place free of judgement yet?”— Pierce