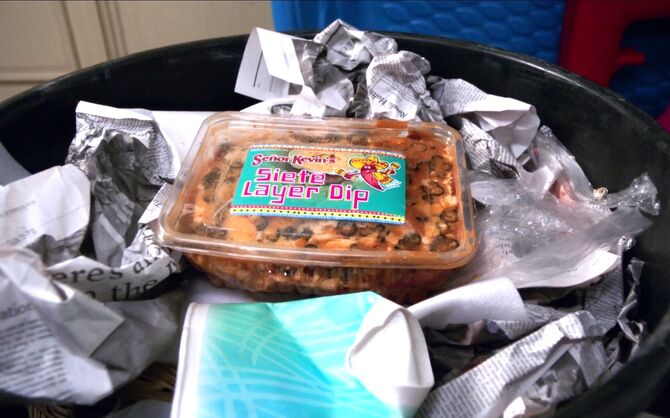 Shirley is doing laundry in her garage and humming the song "Daybreak" when she notices a slight breeze coming from behind the "Shirley's Sandwiches" poster. She looks behind it and discovers a hole in the wall that Abed made to escape from her Thanksgiving dinner. Instead of being angry she states she'll have to remember that the escape route is there when Thanksgiving rolls around next year.

Jennifer Marrie of A Still and Quiet Conscience gave a positive review: "I very rarely let actual tears flow during episodes of sitcoms. My eyes may well up but they never usually spill over. This episode was the exception." She praised Joel McHale's performance, not just in this episode but throughout the course of the series, for making her care so much about a character she's "never been able to relate to, really."

Alan Sepinwall at HitFix has yet to see an episode this season that has made him laugh much, including this one, but nevertheless he thought this episode worked by telling an emotional story well, and he praised it for being both "a satisfying next step in [Jeff's] emotional journey, and a strong episode for Joel McHale." He was less enamored of the part of the episode taking place at Shirley's house, but he did admit that "Danny Pudi's Morgan Freeman voice was amusing ... and there were some good stray gags along the way."

The TV King's Jerome Wetzel was also a fan of McHale's performance: "This is McHale's masterpiece in the series, and he handles it with brilliance and a huge amount of talent that seems to come effortlessly." He was also impressed that the episode was able to paint such a "complex portrait" of William Winger and portray it such that "we see the similarities and differences between the Winger men, as well as the cause of them, all in a single episode of a sitcom. It's quite a feat."

Jill Mader of Couchtime with Jill thought Jeff's meeting his dad "needed more laughs and more unpredictability than we got" and that the other storyline "just didn't deliver."

Luke Gelineau of TV Equals called the episode "very funny" and "one of the best episodes of the season so far, if not the flat-out best." He thought James Brolin was great as William Winger, and Adam Devine even better as William Winger, Jr. But the end of the episode "got a little bit too heavy towards the end of the evening ... finding out the that the lead character of a TV show is this psychologically damaged is pretty alarming." The other storyline didn't work quite as well for him: "The only thing that kinda bugged me about this was that we never saw any of what was driving everybody so crazy."

Mike Papirmeister of the Filtered Lens said, "After last week's mishmash German invasion story, this week offered some much needed improvement." Jeff's reunion with his dad "was the highlight of the night" for him, especially Brolin's performance. He thought the Shawshank Redemption homage was "a nice idea" but "kind of a wasted opportunity." He gave the episode a letter grade of B-plus.

Todd VanDerWerff of the A.V. Club also gave it a B-plus. He laughed a few times, making him "feel a touch more hopeful" about this series' future as a comedy show," but what he really liked was how well the episode handled the dramatic moments: "this was primarily an episode about nailing the dramatic moments, and when the show needed to make those moments count, it did." He also liked that the episode "didn't lean too heavily on the stuff that fans liked in previous seasons and tried to strike out for its own comedy territory. ... I don't mind a callback now and again, but I have an instinctive aversion to when an episode seems to be doing just callbacks, and it often felt to me like the last two episodes tipped the balance on the joke scale far too much toward the latter."

Eric Goldman of IGN thought the episode "pretty successfully deliver[ed] on a whole lot of build up," but also that "it was marred by an unnecessary B-story." He believes it would have been better if Jeff's dad had come to Jeff to spend Thanksgiving with him and the rest of the study group, rather than Jeff going to him and having "the rest of the characters ... stuck in a half-baked prison parody storyline." He gave it a score of 7.0.

Gabrielle Moss of TV Fanatic was of two minds about the episode. On the one hand, she found it quite quotable, liked the Shawshank references, and was impressed by the "stand-out performances from the entire cast, especially from Joel McHale." But on the other, she was unsatisfied by what they had to perform. "For such a highly anticipated moment, Jeff's meeting with his dad just did not measure up. ... William wasn't enough of a sharply drawn character--not enough of a contemptible villain or pathetic lost soul--to make his appearance have much of an impact. His meeting with Jeff had the feeling of simply tying up loose plot holes." She gave the episode 3.8 stars out of 5.

Brian Collins of Badass Digest was happy to see the episode begin with "good ol' fashioned study room scene," giving him a feeling "right off the bat ... it'd be a winner." He "found it to be the most successful [of the season] in terms of the emotional beats, and funny enough to compete with the others." He also liked the storyline at Shirley, at least in part because it contained a Prison Break reference, gave Chevy Chase something to do, revealed that Annie's gynecologist is named Dr. Collins, leaving it "an Armageddon joke away from seemingly [having been written] specifically for me."

Shannon of the Two Cents Corp. was pleased to "finally [get] some closure with Jeff and his dad," but otherwise found the episode "rather forgettable" and the show "still off-kilter."

The Head Geek Furious at GeekFurious thought the episode was very uneven. "Jeff and Britta were excellent in this one," he wrote, and "Jeff's meeting with his dad, their interaction, and even his half-brother all worked and didn't feel forced." He didn't care for the other storyline: "About 90% of Shirley's party felt like tired writing [and] The Shawshank Redemption bit bombed. Minus the later, he would have scored the episode in the 90s, but with it, it earned only a 77 out of 100.

Sean Gandert of Paste doesn't think the episode will "be on anyone's list of best episodes, half of it was solid and genuinely felt like a part of Community's overall story." The half that was solid was Jeff's reunion with his dad, which "did a good job honoring the complexity of this relationship" and portrayed "a surprisingly three-dimensional relationship between the two characters." The other half was "a by-the-numbers lame pop culture parody" with "characters acting in a way that facilitates it rather than in a way that makes sense" and "a lame Abed speech ... about their true family being their friends."

Laura Aguirre of ScreenCrave liked seeing Jeff open up emotionally — "none of it came off as melodramatic or fake" — and that the episode "lot of heart" and was "sweet and emotional." The Prison Break/Shawshank Redemption parody was only so-so; she though "the whole thing didn't really pay off," but she liked Danny Pudi's Morgan Freeman impression and that he drew a map of Shirley's house on his stomach. She gave it a 7 out of 10.

Abby Koenig of Houston Press's Art Attack blog is not a fan of the "Jeff meets his dad" arc in general nor the way it concluded. "[Jeff's] speech is too much and too dramatic, but I feel that about this entire plot line. I just want Jeff to be nasty and sarcastic; that's who he is." She was more complimentary towards the Shawshank Redemption plot feeling that is what Community is "a tight-knit puzzle that starts with the joke and builds a ridiculous plot around. Other television shows build in the opposite direction.

Josh Gondelman of Vulture also seems to believe that Community is at its best when it fully commits to a reference and runs with it, and also he loves The Shawshank Redemption so he was upset that last night's episode split its attention between that and Jeff's storyline, and that it switched gears and became a Prison Break parody instead.

Jeremy Sollie of Geek Binge wasn't expecting much from last night's episode, because it was a Thanksgiving episode airing in March, and also because he thought Jeff's storyline was "doomed to fail," and also also because he's found the 4th season to be "hit-or-miss." So he was surprised that it turned out to be great. "'Cooperative Escapism In Familial Relations' managed to show Jeff's self-loathing and anger towards his father without coming off as melodramatic or overdone." He thought Brolin "blend[ed] in well with the show," giving a performance that felt "less ... a guest role and more of a supporting one." He didn't like Adam Devine's performance as much, but didn't feel it took away from the episode. As for the other storyline, "it may not have been as successful as the rest of the episode, but it was consistently funny and continued the Community trend of not just being a movie parody." He gave it a 9.

Slate's Aisha Harris and Rachael Larimore both thought the episode was more intense that anything the show had attempted before, as it lacked a gimmick to offset the intensity, such as in "Pillows and Blankets". Harris observed a parallel between Jeff's fake appendectomy as an adolescent and William's fake heart attack as an adult and labeled it "poignant". Both thought the second storyline was a bit disappointing, Lattimore because it seemed to show that "the group had already reverted to pretty selfish ways" after the lessons of the previous episode, and Harris because we didn't see more of Shirley's inlaws.

Alexis McLaren of TV Overmind was not a fan of Jeff and Britta's storyline. She's tired of the "Britta pretending to be a psychologist" jokes, and feels Jeff's ongoing daddy issues have been a "useless plot point that we've had to suffer through." But she did like seeing Adam Devine — "I wish there was more of him and less of Britta" — and hearing Shirley humming "Daybreak."

Cory Barker of TV.com is "happy to report that this episode's treatment of that event worked very well, resulting in clear, effective, and measured storytelling capped off by one of Joel McHale's best performances in the show's run." He wasn't sure what to make of the other storyline; he thought there were some good bits, but that "overall the plotline felt rushed and underdeveloped" and that conclusion, "despite its good intentions, didn't pack much of a punch".

Community's ratings rose 25% from the previous week's episode,and it recieved a 1.5/5 according to tvbythenumbers . This placed it third in its timeslot (but fourth in total viewers) and making it by a pretty wide margin the most watched show on NBC that night. On the Twitter, #HappyThanksgiving trended in the US for at least ten minutes after the episode ended in the Central and Eastern time zones.

On September 17, 2012, Community writer Steve Basilone tweeted a picture of the front of the script. On September 18, 2012, online entertainment news sites Entertainment Weekly and TV Line both reported that this episode was to introduce Jeff's father to be portrayed by actor James Brolin. Joel McHale would later tweet a photo of himself and Brolin on set during filiming of the episode. At the same time, Brolin had also been cast as the father of Richard Castle on the ABC crime drama "Castle".

“Yeah, well, look, I don't have to tell you, I'm not a natural caretaker, but with Willy, you know, I checked all the boxes and he still turned out softer than wet cheese.”— William Winger