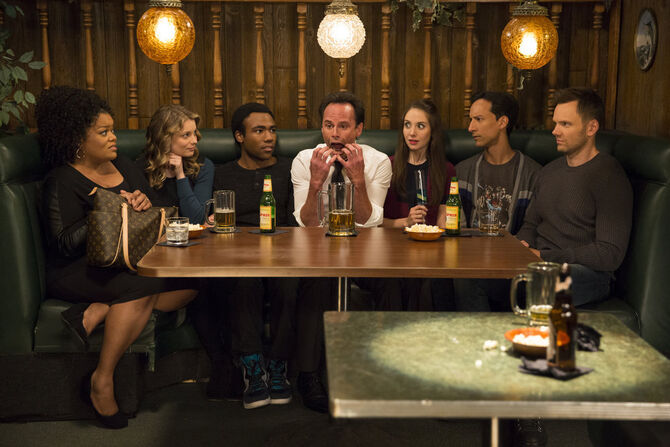 Mr. Stone and the study group are at a restaurant having a drink. Stone is inebriated and has dropped the dour façade he was using at the inquest. He reveals to the group that the cause of Pierce's death was dehydration from filling up all the sperm cylinders he bequeathed to the group.

In a November 25 interview with Entertainment Weekly, actor Walton Goggins discussed his role as "Mr. Stone" on Community. He mentioned he is a fan of the show and was eager to guest star:

“I’m always looking to not only challenge myself, but to put myself in situations where I’m not just intimidated but outright insecure.”

A livestream youtube table reading of this episode, which the actors did over video conferencing due to the covid-19 pandemic, was done on May 18, 2020 as a charity event to raise money for the World Central Kitchen and Frontline Foods. Dan Harmon was the narrator and the main cast reprised their roles. Guest star Walton Goggins was unable to attend and so his role as Mr. Stone was recast with actor Pedro Pascal taking over the part. Jim Rash took over for the role of Mara and the Fun for Friends guy who demonstrates the handshake Troy based his and Abed's handshake on, and later participated in the Q&A. During the reading, Gillian Jacobs revealed she still had one of the sperm cylinder props from the episode.

“Mrs. Bennett, is true you are a Platinum-level donor for the Pro-Life organization prenatalpatriots.org?”— Mr. Stone
“WHAT?!”— Britta
“Keep it cool, girls.”— Jeff
“It's my money and my choice.”— Shirley
“Yeah, well, if I wanted the government in my uterus I would fill it with oil and Hispanic voters!”— Britta

“Do you care about people at all, Abed? Answer on the polygraph!”— Annie
“(after a pause) Jeff made me apply for handicapped parking so he can get a better spot.”— Abed
“Britta's the one that invited Garrett to Annie's birthday party!”— Jeff
“Troy won't sit on a toilet seat after Jeff!”— Britta
“When we're alone Shirley refers to you guys as 'those people'!”— Troy
“Oh! When Annie's with other females she calls Jeff her uncle!”— Shirley
“Shirley thinks we're all going to hell!”— Annie
“You are all going to hell!”— Shirley