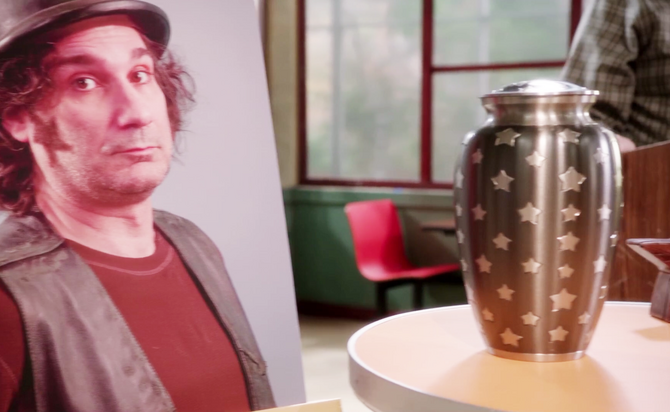 “As a psychologist [student] I hereby offer my licensed [unlicensed] services as a grief counselor [grief causer]. If anyone needs to talk, the doctor [not even close] is in.”— Britta, with [interjections] from Jeff

“Okay. Let's just give this a little look-a-roo. 'Request for increased security. Cool new uniforms.' I like that. 'Power to enact martial law,' not so much. 'Indefinite detention, pepper spray, involuntary cavity searches. NO SOFT-SERVE?!'”— Dean Pelton

“Does anybody have anything they want to say in the memory of Star-Burns? Oh! Because his sideburns were shaped like stars! I just got it. I just got that.”— Dean Pelton

“Star-Burns, or 'Alex' as he liked to be called, was a human being. A Greendale human being, like me. I've given this place my childhood, my enthusiasm, and my loyalty and in return, Greendale has warped me like a Barbie in a microwave. Our school flag is an anus. We're not even the best community college in our community! Let that sink in. And the cherry on top of this total lack of sundae: I'm failing a remedial biology class on a technicality all because you don't know how to run a school. Shame on you, Dean. Shame. On. You. Edison out!”— Annie

“I was gonna be the first one in my family to graduate from community college. Everyone else graduated from normal college.”— Troy

“I know it's sad, but death is a natural part of life and by the time I finish this sentence a hundred people would've died in China.”— Jeff

“WHY WOULD YOU STOP TALKING!?”— Troy

Retrieved from "https://community-sitcom.fandom.com/wiki/Course_Listing_Unavailable?oldid=71070"
Community content is available under CC-BY-SA unless otherwise noted.