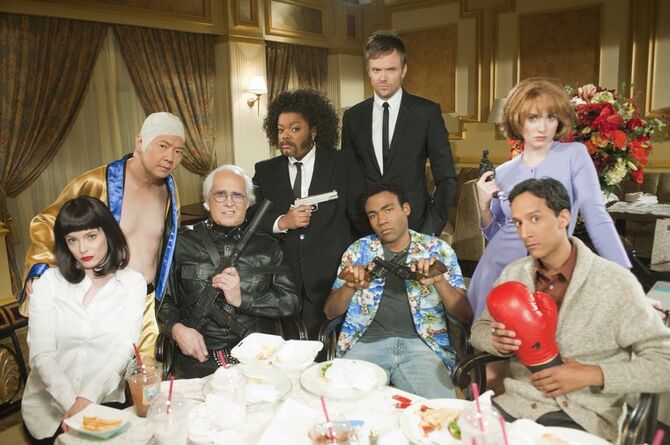 “His obsession with pop culture always alienated him. He'd quote movies, pretend his life was a TV show, he'd watch Cougar Town... it was as if he didn't want people to like him.”— Jeff, narrating

“Can you imagine the expression on Abed's face when he walks in?”— Annie
“Of course I can imagine it. It's always the same.”— Pierce
“Yeah, but he's gonna say 'cool' at least five times.”— Annie

“Pulp Fiction? Yeah, I saw it on an airplane. It's cute. It's a thirty minute film about a group of friends who like cheeseburgers, dancing, and the Bible.”— Shirley

“How is it even possible to lie when you are alone?”— Abed
“You can call a phone sex line. That's lying to yourself.”— Jeff
“No, that's just being honest with a stranger about being lonely.”— Abed
“What if you're dishonest about why you're lonely? What if you're a good-looking guy who calls a phone sex line and tells them he weighs 400 pounds, just so he can hear a woman say she's attracted to him anyway?”— Jeff
“Well, I don't believe that happens.”— Abed
“Wrong. That's me! I did that last week.”— Jeff
“But why would you pay a woman on the phone to think you're fat?”— Abed
“Because I'm scared that if I were overweight that no one would like me. God, that feels good to admit!”— Jeff

“And I said: "No, that's a girl's costume." And my mom said: "It's fine. Indian boys have long hair and braids too." There was only 45 minutes left to trick-or-treat, so what could I do? I put the damn thing on, and I went door-to-door. And everyone was going: "Oh, what a pretty little girl!" And by the third house, I stopped correcting them. I mean, why draw attention to it? And honestly, once the shame and the fear wore off, I was just glad they thought I was pretty.”— Jeff

“You said the meal was at market price. What market are you shopping at?!”— Troy

Retrieved from "https://community-sitcom.fandom.com/wiki/Critical_Film_Studies?oldid=70750"
Community content is available under CC-BY-SA unless otherwise noted.