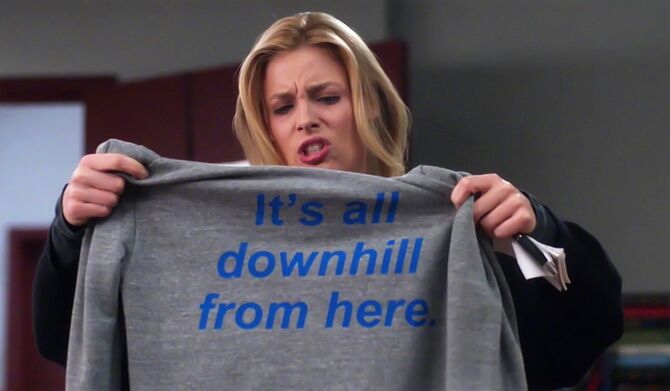 “I seem to recall a story about a man named Joseph who happily raised a child that wasn't his.”— Andre
“History's greatest chump. We're talking about Joe Kennedy, Right? ”— Pierce

“You know, you really shouldn't say 'you people.'”— Andre
“Oh, it's okay. Pierce was having trouble quitting offensive phrases cold turkey so we've created a bargaining system. We traded 'you people' for some of his other favorite phrases.”— Annie
“Yeah, I really got Jewish-personed out of that one.”— Pierce

“Hit me with your genie's bottle...rub it all over me.”— Britta

“Don't saw the floor! Don't saw anything! I'm tired of confiscating saws. Gimme that, take this.”— Jeff
“"Parental Rights?" You're adopting me?”— Chang

“Who am I to stand in the way of someone trying to put their life together? What am I, daytime television?”— Jeff

“Something terrible has happened. My Kickpuncher III: The Final Kickening DVD is missing.”— Abed
“That's awful. Somebody took it? Who would...? Wait, Kickmuncher 3? Wasn't that the movie that Lukka was...? You don't think... Unless... You don't suppose... However... No. That would mean that you guys would have to stop hanging out... No!”— Britta
“We have video of you taking the DVD, Britta.”— Abed

“He's a war criminal!”— Britta
“In what war is he a criminal? In the battle for our affections?”— Troy

“While I was gone, you learned to accept the bad with the good.”— Andre
“Oh, that's the Greendale effect. Our school's motto is "lower your standards."”— Jeff

Retrieved from "https://community-sitcom.fandom.com/wiki/Custody_Law_and_Eastern_European_Diplomacy?oldid=69562"
Community content is available under CC-BY-SA unless otherwise noted.