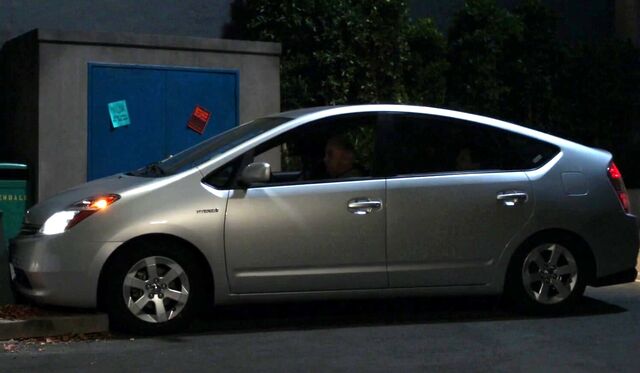 Dean Pelton's Prius can be seen as another attempt by him to seem more passionate about an issue than he actually is. In this case it's an example of his wanting to be seen as environmentally conscience. It's a silver, four door Eco-freindly vehicle which Pelton is proud of and liked to brag about. The car's first appearance was the Season One episode "Spanish 101".

During the 2010 Fall semester at Greendale, Craig Pelton received an official complaint from Shirley Bennett about a religious movie Abed Nadir was shooting. Together they drove in Dean Pelton's Prius to the Cafeteria where it was being filmed to confront the director. After exiting the car they found the entrance to the building blocked by "The Hipsters", an elderly gang of students led by Leonard. They cautiously moved past them and ignored their taunts to get to their destination. Pelton absentmindedly left the keys to his car in the ignition which inspired the Hipsters to take the vehicle out for a joyride. They didn't get far before campus security stopped them ("Messianic Myths and Ancient Peoples").

At the end of the school year, a reporter named Mr. Jacobson was doing a piece on Dean Pelton for "Dean Magazine". On a tour of the campus Pelton brought Jacobson to the Anthropology classroom where a pregnant Shirley Bennett ended up going into labor. Pelton went to get his car to drive Shirley to the hospital but before he left he bragged to Jacobson that he owned a Prius. Unfortunately a riot had broken out during the World food festival event being held on the campus quad. Dean Pelton's Prius was a casualty of the incident as it was overturned along with several other vehicles ("Applied Anthropology and Culinary Arts").

At the start of the 2013 Fall semester at Greendale, Annie Edison and her Study group were in their fourth year at school. She wanted to revel in her Senioritis by doing pranks on campus. Shirley Bennett joined her in this endeavor and they targeted Dean Pelton as their first victim. The first step involved retrieving Pelton's car keys from his office. Together they then went to the Prius and covered the interior with tinfoil before filling it completely with popcorn kernels. They then used mirrors to reflect the sunlight into the inside of the car to get the kernels popping ("History 101")".

Retrieved from "https://community-sitcom.fandom.com/wiki/Dean_Pelton%27s_Prius?oldid=56220"
Community content is available under CC-BY-SA unless otherwise noted.