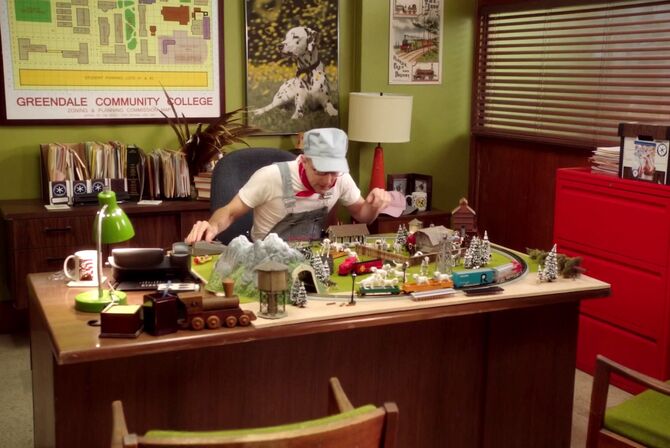 Dean Pelton's office is where he is supposed to be handling the daily administrative duties of his position at Greendale Community College. It's rare that Dean Pelton is found to be actually working in the office as he is usually goofing off, making announcements on the PA system or trying to figure out what outfit he should wear for the study group's benefit. Its first appearance was in the Season One episode "Football, Feminism and You" and has been prominently featured on the show throughout the rest of the seasons. It was also featured in a series of Community webisodes entitled "Dean Pelton's Office Hours".

The office has a rectangular layout and is connected directly to the administrations office through a side door which also serves as the main entrance. The office has a dalmatian themed decor stemming from Dean Pelton's fetish and the animal's image can be seen on several posters and a few statuettes. Additionally, the office is furnished with a desk, two visitor's chairs, several file cabinets, a couch and a small table and chair set. A large map of Greendale is prominently displayed behind Pelton's desk. The office has a large closet which Pelton uses to house his numerous costumes and outfits.
Retrieved from "https://community-sitcom.fandom.com/wiki/Dean_Pelton%27s_office?oldid=60609"
Community content is available under CC-BY-SA unless otherwise noted.