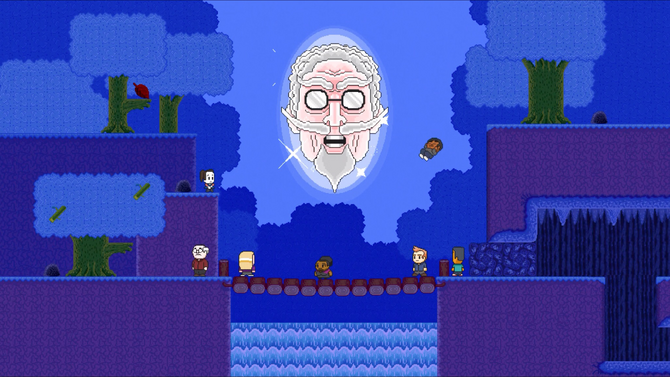 Troy and Abed find an abandoned baby on the study room table and immediately begin planning how they will raise it together. Abed offers to take on a job, and Troy begins to cry at the thought of having to stay home while Abed climbs the corporate ladder. The baby's mother then climbs out from under the table, where she was retrieving a dropped toy, and takes the baby out with her. As the mother is leaving, the baby babbles Abed's "cool, cool, cool" catchphrase.

This episode has the production code 3x22 and was the last one filmed for Season Three. Computer animation studio "Titmouse" handled the video game sequences for this episode. They had previously done the anime inspired section of the episode "Foosball and Nocturnal Vigilantism". NBC decided to broadcast the last three episodes of the season on May 17, 2012 with "Digital Estate Planning" airing first at 8:00, "First Chang Dynasty" following at 9:00 and "Introduction to Finality" closing out the night at 9:30.

The original End Tag scripted for this episode had Abed gave Pierce an edited version of the "Journey to the Center of Hawthorne" video game that allowed him to get closure with his dad. This clip was never filmed due to Chevy Chase refusing to film the scene. On March 21, 2012 Deadline.com reported the behind the scenes fallout which generated some bad publicity for Harmon, Chase and the show. Later on August 22, 2012, creator Dan Harmon took part in a Reddit discussion and elaborated on what happened:

“Man, why can't my mom be here? She always said my video-game knowledge would come in handy. I never believed her.”— Troy

“Where are your clothes?”— Abed
“Pierce taught me poker. I'm not good at it.”— Troy

“Unbelievable. Jeff bet all our lives on Britta, and won. And I lost my pants to a pair of nines.”— Troy

Retrieved from "https://community-sitcom.fandom.com/wiki/Digital_Estate_Planning?oldid=68791"
Community content is available under CC-BY-SA unless otherwise noted.