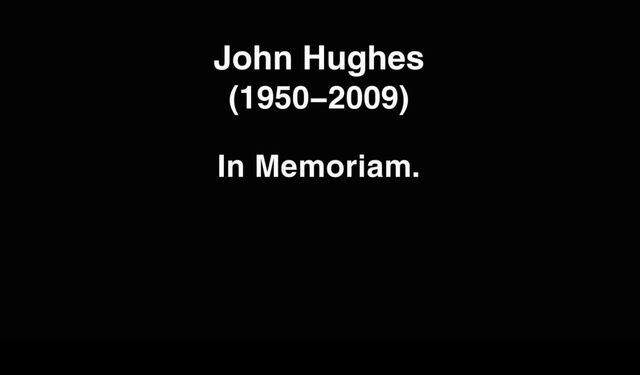 ♫Don't You (Forget About Me)

In his first year at Greendale, Jeff posed as a "board certified Spanish tutor" creating a fake Spanish study group to impress his classmate Britta. He and was surprised when Britta invited Abed to the study session who in turn invited Annie, Shirley, Pierce and Troy. When the group began to argue amongst themselves, Britta tricked Jeff into calming things down by agreeing to have dinner with him afterwards. After resolving the conflict with a Winger speech, Britta recanted on her promise and revealed to the group his fake credentials. They kicked him out and tried to resume studying but found it wasn't as fun without Jeff and the session quickly ended. The group reconnected with Jeff who was outside the library and took pity on him. They decided to forgive him and invited him to return to the study group. As they re-entered the building the song "Don't You (Forget About Me)" played in the background ("Pilot"). The song was again heard in the Season Four episode "Heroic Origins".

Don't You (Forget About Me) by Simple Minds

Hey, hey, hey, hey
Ohhh...
Won't you come see about me?
I'll be alone, dancing you know it baby
Tell me your troubles and doubts
Giving me everything inside and out and
Love's strange so real in the dark
Think of the tender things that we were working on
Slow change may pull us apart
When the light gets into your heart, baby 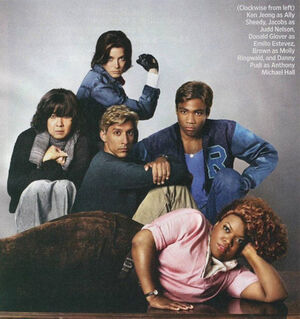 "Community" creator and original showrunner Dan Harmon was a fan of John Hughes who the Pilot of "Community" was dedicated to shortly after his death. Dan Harmon has cited his work as being an influence on the show and referenced a few of his movies in various episodes. This includes not only using the song "Don't You (Forget About Me)" but also a reference in the "Pilot" episode where Abed recites verbatim the "John Bender speech" from Hughes' seminal movie "The Breakfast Club". Another tribute was made to the film later in the season when Abed, Jeff and a pizza delivery guy recreated the dance sequence in the movie with the same song "We Are Not Alone" playing in the background. In an Entertainment Weekly photo shoot with the cast of Community, the iconic poster of "The Breakfast Club" was recreated with Danny Pudi, Yvette Nicole Brown, Donald Glover, Gillian Jacobs and Ken Jeong.
Retrieved from "https://community-sitcom.fandom.com/wiki/Don%27t_You_(Forget_About_Me)?oldid=47111"
Community content is available under CC-BY-SA unless otherwise noted.