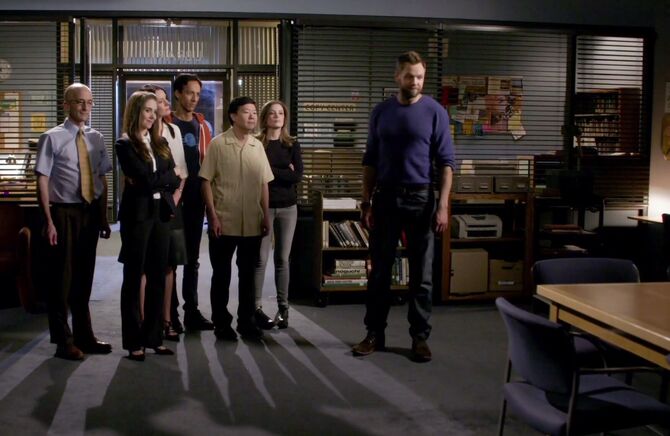 It's implied that the Ass Crack Bandit, or at least one of them, was possibly Annie. Stage directions in the script hint at this but does not definitively say she is the ACB.

This episode features the first use of a broadcast television banned expletive. It was spoken twice by both Dean Pelton (Jim Rash) and Britta Perry (Gillian Jacobs). In an interview with TV Insider, "Community" creator Dan Harmon explained how it happened:

“It was kind of unintentional. That one that Jim [Rash, as Dean Pelton] does is adlibbed. As soon as he said it, the entire cast started laughing, but I edited around it. As for Britta's I should have bleeped it… it's weird to have two "f***s" on that one.”

“Dice not included, some assembly required. Lines between perception, desire, and reality may become blurred, redundant, or interchangeable. Characters may hook up with no regard for your emotional investment. Some episodes too conceptual to be funny, some too funny to be immersive, and some so immersive they still aren't funny. Consistency between seasons may vary. Viewers may be measured by a secretive obsolete system based on selected participants keeping handwritten journals of what they watch. Show may be cancelled and moved to the internet where it turns out tens of millions were watching the whole time. May not matter. Fake commercial may end with disclaimer gag which may descend into vain Chuck Lorre-esque rant by narcissistic creator. Creator may be unstable. Therapist may have told creator this is not how you make yourself a good person. Life may pass by while we ignore or mistreat those close to us. Those close to us may be those watching. Those people may want to know I love them but I may be incapable of saying it. Contains pieces the size of a child's esophagus.”— TV commercial narrator

“There is skill to it. More importantly, it has to be joyful, effortless, fun. TV defeats its own purpose when it's pushing an agenda, or trying to defeat other TV or being proud or ashamed of itself for existing. It's TV, it's comfort. It's a friend you've known so well, and for so long you just let it be with you. And it needs to be okay for it to have a bad day, or phone in a day. And it needs to be okay for it to get on a boat with Levar Burton and never come back. Because eventually, it all will.”— Abed

“I don't wanna be fine. I wanna be 25 and heading out into the world. I wanna fall asleep on a beach and be able to walk the next day, or stay up all night on accident. I wanna wear a t-shirt without looking like I forgot to get dressed. I want to be terrified of AIDS, I want to have an opinion about those...[whispers] boring ass Marvel movies. And I want those opinions to be of any concern to the people making them.”— Jeff
“Well I want to live in the same home for more than a year, order wine without feeling nervous, have a resume full of crazy mistakes instead of crazy lies. I want stories and wisdom, perspective. I wanna have so much behind me I'm not a slave to what's in front of me, especially these...[whispers] flavorless unremarkable Marvel movies.”— Annie

“I let you go, Annie. From my hands and my head. The heart, which cynics say is code for penis, wants what it wants. But I let you go.”— Jeff
“The others are coming. I think you should kiss me goodbye or you might regret it for the rest of your life.”— Annie
“What about you? ”— Jeff
“Oh, I'll regret the kiss for a week, I'm in my 20's.”— Annie