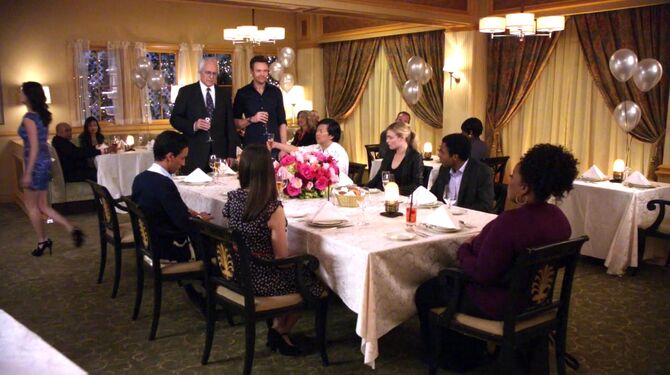 The Fancy restaurant was a fine dining establishment visited several times by the Study Group in their second year at school. It was a very upscale eatery with expensive decor, a highly trained staff, and a pricey menu. The restaurant's first appearance was in the Season Two episode "Critical Film Studies".

Towards the middle of Abed 's sophomore year at Greendale, he felt that his friendship with Jeff wasn't as strong as it used to be. On his birthday, Abed asked Jeff to join him at a Fancy restaurant in order to correct this. He went about orchestrating a movie homage to "My Dinner with Andre" casting Jeff clandestinely as the character in the film who lost touch with a weird friend. With the cooperation of a restaurant waiter to help him in this deception, he hoped an honest dinner conversation between him and Jeff would reinvigorate their friendship.

Retrieved from "https://community-sitcom.fandom.com/wiki/Fancy_restaurant?oldid=60580"
Community content is available under CC-BY-SA unless otherwise noted.