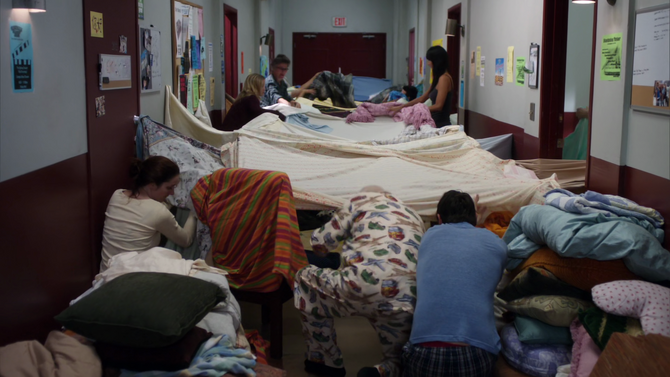 In their sophomore year at Greendale, Troy had a sleepover with Abed in his dorm room, and they both created a blanket fort. They decided to make the fort bigger and expanded it past Abed's room until it took over the entire dormitory. Eventually, the blanket fort becomes so popular that it becomes a craze that sweeps over to other college campuses. Its first appearance was in the Season Two episode "Conspiracy Theories and Interior Design". It later inspires the creation of a pillow fort and another blanket fort in the Season Three episode "Digital Exploration of Interior Design".

In the study group's second year at Greendale, Troy was living in Pierce's mansion. Abed invited him to sleep over at his dorm where they intended to build a blanket fort. Britta mocked their immaturity but her negativity didn't stop them from building the fort. It was a small tent-like structure anchored by Abed's bunk bed. Happy with how it turned out, they decided to expand it to fill his entire room. Abed's friend Pavel stopped by during its construction and was impressed with what they created so far. When Pavel asked if he could join them, Troy and Abed asked him in return if he had any blankets himself. He replied he had a "buttload" which pleased the duo as they had a plan.

Not too long afterwards, other students helped further expand the fort outside of Abed's room into the dorm's hallway. Troy was worried that it no longer could be considered a fort but Abed told him it was okay as long it's made out of blankets. Troy regarded some sheets Leonard gave him and thought they'd be perfect for use in a memorial dedicated to Pierce's mom who just passed away. The construction continued until the blanket fort stretched beyond the dorms and into other sections of the school. An intricate network of multiple tunnels were created and one was entered by a "Professor Professorson". He was being pursued by Jeff and Annie who were investigating his true identity.

Jeff and Annie chased after the professor where they ran into Troy and Abed and explained the situation. Using book reading lights, Abed and Troy led Jeff and Annie until Leonard blocked their path. Abed warned him that he shouldn't be in that section as he already had three farting violations. Annie pointed out Professorson was getting away so Troy led them through a short cut in the fort's Turkish district. They were briefly distracted when they found Britta inside a bizarrely themed party room until Annie picked up the professor's trail. The foursome tried to catch him but they were all stopped by a Latvian Independence parade which prevented them from following. However, Professorson made the mistake of trying to blend in with the parade and Jeff tackled him as he passed by.

Afterwards, Pavel showed Troy and Abed the latest issue of The Gazette Journal Mirror which had an article on their blanket fort on the front page. It turned out they had started a nationwide craze with the fort as campuses across the country were building their own. They were both upset that their unique vision had suddenly become mainstream. Troy and Abed initiated "Protocol Omega" and went to a special area of the fort with two socks hanging down from the "roof". At the same time they pulled down on the socks and the entire blanket fort came undone. With their creation destroyed, Troy and Abed decided to move onto their next project, building a cardboard submarine ("Conspiracy Theories and Interior Design").

In their third year at Greendale, Troy and Abed decided to build a spiritual successor to Fluffy Town this time made out of pillows. During construction, Dean Pelton pointed out they were on track to setting the world's record for the largest pillow or blanket fort. The duo had a falling out as Troy wanted to pursue that goal and Abed just wanted to complete his artistic vision. Troy went and assembled his own team to start construction of a separate blanket fort. Eventually Abed's build crossed paths with Troy's and the two different fort building teams had a face off. This led to a minor skirmish with escalated to an all out war ("Digital Exploration of Interior Design"). Abed at first named his construction "New Fluffy Town" before renaming it "Pillowtown" in response to Troy naming his fort "Blanketsburg" ("Pillows and Blankets").

Troy and Abed's blanket fort was at first a few blanket and sheets covering Abed's bunk bed and a dresser. It then grew to fill the room and with Pavel's help expanded out into the hallway. The rest of the dormitory students started to help as well and the entire dorm was soon converted into one large blanket fort. It continued to expand and became large enough for parades, an avant garde club, and a memorial to Pierce's mom. The three rules of the fort were: