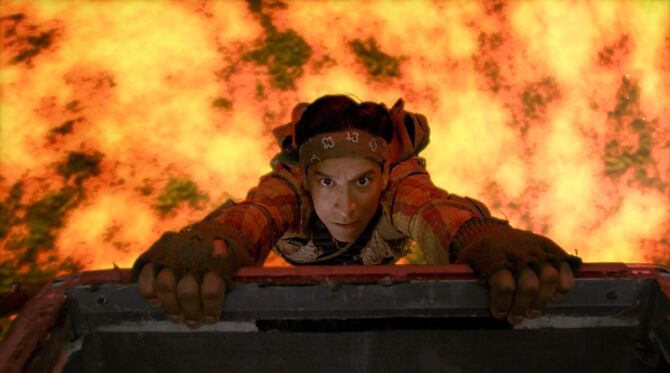 Troy asks LeVar Burton questions about Star Trek but, rather than criticisms of various episodes, he asks about the minutiae of on-set life.

Production diagram for the introduction of the "Juggernaut" 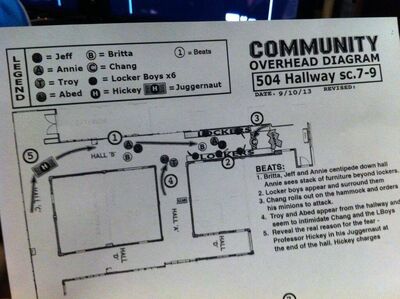 During the Q&A session for the charity table read of "Cooperative Polygraphy " during the 2020 COVID-19 pandemic, Dan Harmon recalled the episode's tag originally showed LeVar Burton yelling at other drivers during a traffic jam (including using his Reading Rainbow clout over another driver). Harmon claims this version was shot and even edited, although none of the cast recalled ever seeing it.

“Don't regress to primal behavior just because it's allowed. We're human beings, not the editors of Teen Vogue.”— Britta

“This is why the British never win at sports! Because everyone else cheats!”— Professor Duncan

“Sweet, sweet portable chairs. Plastic gold, four-legged diamonds... you claiming this? Lava joust?”— Jeff
“Did you all hit your heads on each other's heads?”— Britta

“What time did you guys have to get up in the morning? Does every writer write for one character? What a best boy? (I saw it in the credits once) Why don't they call it Planet Trek? You never go to a star. You-, not one episode.”— Troy, asking LeVar Burton about Star Trek