Dean Pelton and Pierce collaborated on the design of the Human Being in his office. They spent a lot of time studying various color charts and pictures of specific racial features in order to eliminate any sign of ethnicity in the new mascot. Jeff remarked upon seeing their efforts that to not be racist is the new racism. The final look of the mascot is finished before the football pep rally where Troy was to debut as Greendale's new quarterback. Jeff and Annie were two of the first students to see the mascot and reacted to it's bizarre appearance accordingly with shock and horror ("Football, Feminism and You"). The Greendale Human Being is next seen acting as a cheerleader for the debate championship between Greendale and City College. He admonishes Jeff for his performance in the first half of the debate. Later, he can be seen celebrating with Dean Pelton and Professor Whitman after Greendale wins the debate ("Debate 109"). Just before Christmas, the Human Being had antlers and is on a bike pulling the Dean dressed as "Mr. Winter" in a sleigh ("Comparative Religion"). He is renamed the "Cupid Being" for Valentine's Day. He is outfitted with a bow and arrow along with red shorts and Cupid wings. He is tasked with delivering to students their valentines ("Communication Studies"). During "Family Day" he is seen with an obvious female counterpart even though he was designed to be genderless ("Basic Genealogy").

In the 2010 Fall semester of Greendale, the Human Being is first seen in a group photograph with the school's basketball team on a calendar hanging in Abed's room ("Anthropology 101"). The Human Being is seen at the "Pop and Locktoberfest" ("Accounting for Lawyers"). On the Valentines Day of 2011, the 'Cupid Being' was seen on posters around the school advertising the Valentine's dance. Cupid Being Grams posters were also seen suggesting that he delivered Valentines grams again that year. One of the pep squad members portraying the Human Being is brought into Dean Pelton's office for harassing a cheerleader. At first it seems like the cheerleader made a mistake when it's shown that a woman is playing the part of the mascot. However the pep squad member accidentally reveals her stalkerish obsession with the cheerleader. As a result, Dean Pelton immediately fires her ("Dean Pelton's Office Hours").

At the start of the 2011-12 school year, the Human Being is seen flying in the cafeteria during the final scene of Jeff's musical daydream ("Biology 101"). During Christmas in the 2011 semester of Greendale, the Human Being is seen wearing a festive outfit with icicles hanging off of him. Annie remarks he looks creepier but Shirley thinks it makes him look more festive ("Regional Holiday Music"). When investigating who mashed the Study Group's yam, the Human Being is seen in a montage in handcuffs ("Basic Lupine Urology").

In the study group's fifth year at Greendale, the school board decided to sell the school to the Subway corporation. Over the following weeks the campus is slowly transformed into a Subway sandwich university. The business even brings onto the campus their corporate spokesperson Jared Fogle. The Greendale Human Being walked in on him signing autographs and realized he was being replaced as the school's mascot ("Basic Story").

In a non-canonical video for Community The Complete Fourth Season, it's mentioned by Dean Pelton that the Greendale Human Being had been murdered and tryouts for a new Human Being were taking place. The murder was related to the cancellation of the Knitting class.

The Rudolph Being
Appearance:"Comparative Religion"

The Cupid Being
Appearance:"Communication Studies"

The Cupid Being
Appearance:"Communication Studies"

The Icicle Being
Appearance:"Regional Holiday Music" 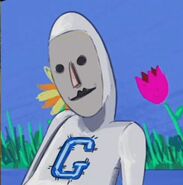 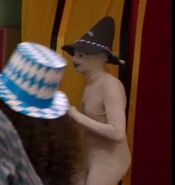 German Human Being
Appearance:"Alternative History of the German Invasion" 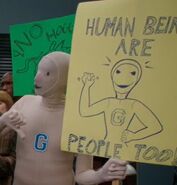 Protester Human Being
Appearance:"Alternative History of the German Invasion" 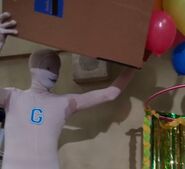 "Football, Feminism and You"

“The team's name is 'The Human Beings'?”— Shirley

“Yep, my idea! It was originally the Greendale Grizzlies but I thought that um, well [sotto] a lot of these students have been called animals their whole lives.”— Dean Pelton