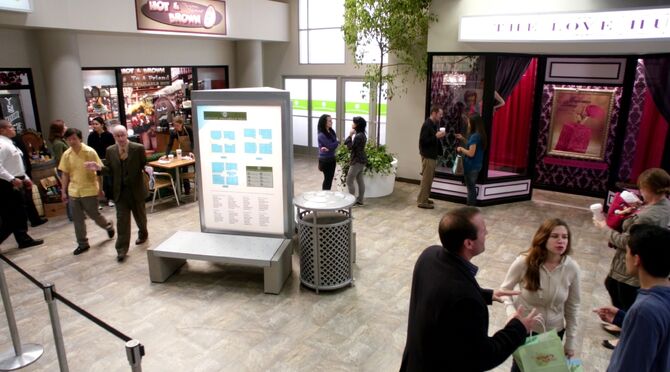 The Greendale Mall is a shopping center which was a location revealed to be instrumental in the formation of the study group. Inside the mall are various retailers including Hot & Brown and Yogurtsburgh franchises, a movie theater, a lingerie store "The Love Hut" and the Mexican themed restaurant Señor Kevin's. The mall was first mentioned in the Season Three episode "Virtual Systems Analysis" and made an onscreen appearance in the Season Four episode "Heroic Origins".

In the study group's first year at Greendale, Shirley mentions that Annie and Britta went to the mall trips on the weekend and neglected to invite her ("The Art of Discourse"). In the study group's third year at school, Jeff decides to blow off helping Annie move into Troy and Abed's apartment to go shopping at a clothing store at the mall. He runs into Dean Pelton there who blackmails him into spending the rest of the day with him at the mall. This includes lunch at Señor Kevin's and singing at the Karaoke bar ("Studies in Modern Movement"). Later in the year, Annie convinces Troy and Britta to have a lunch date over at the mall eating at Señor Kevin's ("Virtual Systems Analysis").

In their senior year, Abed discovers that the mall was a location which was integral to the formation of the study group. Back in 2008, Abed met and harassed Shirley's children at the movie theater. Shirley had sent them there so she could celebrate her anniversary with Andre. Earlier that day when she dropped them off she bought some special lingerie for Andre at The Love Hut. She was forced to cancel their date at a restaurant in the mall to pick her kids up. After she left, Andre met up with a stripper named Mysti. She was there with Jeff celebrating their court victory after he had successfully defended her from tax evasion charges.

Retrieved from "https://community-sitcom.fandom.com/wiki/Greendale_Mall?oldid=59563"
Community content is available under CC-BY-SA unless otherwise noted.