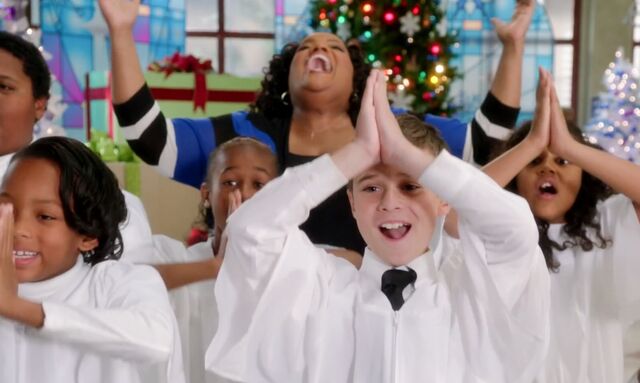 In "Paradigms of Human Memory," it was revealed that the study group filled in for the Glee Club when the previous members died in a tragic bus accident. When the latest Glee Club becomes incapacitated in "Regional Holiday Music," the study group refuses Mr. Radison's request to replace them once more. Abed becomes "Mr. Rad"'s ally, however, and manages to convince Troy, Annie and Pierce to participate in the upcoming pageant. Shirley and Britta become worried as Pierce approaches them in the student lounge...

This is the last onscreen "gleeful conversion." Annie, Jeff and Britta's conversions all happened off screen. It's shown that Jeff wasn't really convinced to join the Glee club after Annie finished her musical number, and it's left unclear how the three of them were actually "converted." For some reason, all three became enthusiastic and willing participants in the Christmas Pageant.

In DVD commentaries on the Community: The Complete Season Three, Yvette Nicole Brown mentions that the girl in the front row of the choir on the right is actually Ella, her goddaughter. On the left is the daughter of Yvette's friend Sydney. The rest of the choir is comprised of the girl's friends. The ensemble was put together by another friend of Yvette's named Donna, who is a choir director.