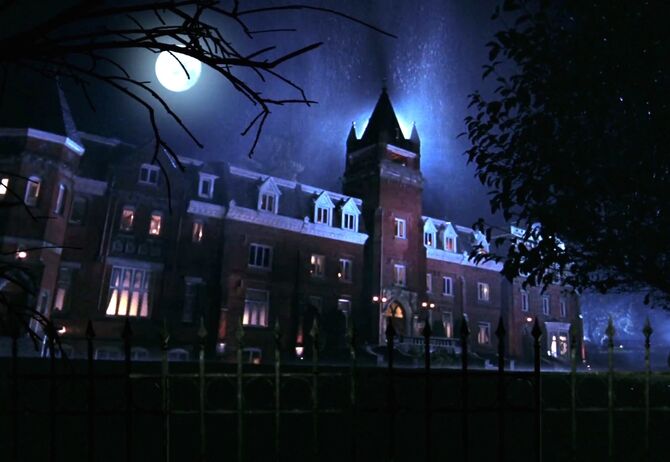 Hawthorne Manor is actually one of six estates owned by his father Cornelius Hawthorne. The large, Gothic style residence was the home of not only Pierce but also his father, Cornelius Hawthorne and his mother. For a time, Troy Barnes lived there as well until he moved into an apartment with Abed. According to the address on Pierce's checkbook, his home is located at 34236 Riverwood Drive, Edgewood 80022. Although mentioned frequently in previous Seasons, the mansion is not physically seen until the Season Four episode "Paranormal Parentage".

At the end of the study group's first semester at Greendale together, Troy is kicked out of his house by his father. Uncharacteristically, Pierce extends an invitation for him to move into his mansion with him. He tells Troy it's because he doesn't want the study group to drift apart after school ends. Troy hesitates since he wanted to move in with Abed in his dorm room. Eventually, he accepts Pierce's offer after he realizes it's better for the sake of his friendship with Abed not to move in with him at this point in their relationship ("Pascal's Triangle Revisited").

Troy and Pierce's rooms at the mansion can be briefly seen at the start of a video montage. Later, they both arrive at school together to begin the study group's second semester at school. It's revealed that Troy had been channelling his annoyance at Pierce's racist comments by quoting him verbatim on a Twitter account he created called "Old White Man Says". Pierce is angry at first but after learning how many followers he has on Twitter he decides to embrace it and allows Troy to keep posting his statements ("Anthropology 101").

Not long afterwards, Troy discovers Pierce's mom dead in the laundry room of the mansion. As a member of the Reformed Neo Buddhist movement, Pierce doesn't treat this as an actual death but merely a step in a process which will eventually bring her back to life. Wrestling with his own mortality, Jeff attempts to prove his religion is a sham but changes his mind when he hears a recorded message from Pierce's mom to her son ("The Psychology of Letting Go"). After Winter break, Troy mentions he searched the mansion for secret portals to magical worlds but all he could find was a Laser Disc of "Emmanuel in Space" ("Asian Population Studies").

In the study group's third year together at school, Troy had moved out of the mansion and into an apartment with Abed. Pierce, jealous over their friendship, tries to casually remind him that they used to live together. He pretends not to care that he and Abed are now roommates and mentions he removed Troy from all the mansion portraits. When Troy responds that he found a place more within his age range, it rubs Pierce the wrong way. Wanting to ruin the housewarming party, Pierce had already decided to give Troy a gift for the event that he knew would freak him out, one of his troll dolls. It was on display in the hall outside Troy's room at the mansion. Troy hated it and believed it watched him while he was sleeping. Thanks to a roll of a yahtzee die by Jeff, several different scenarios play out, most of which Pierce gives him the gift and Troy freaks out. However, in one scenario Troy sincerely thanked Pierce for letting him stay at his mansion. In the "Prime Timeline" Pierce opts not to give Troy the troll doll since he is having a good time at the party.

In the study group's senior year, the gang – sans Pierce – is going to Vicki's Halloween party ("Paranormal Parentage"). Pierce calls Troy and tells him he locked himself inside the panic room in his mansion. The study group goes to help him out and see the mansion for the first time. After searching the mansion for the codes to unlock the door to the panic room, they are all frightened by the strange and unusual phenomena occurring there. It's then revealed it was all an elaborate prank by Pierce to get back at them for going to a Halloween party without him. Abed shows video surveillance of another person inside the mansion besides Pierce.

Gilbert Lawson, his illegitimate half-brother ("Digital Estate Planning"), then reveals himself to the group. Gilbert explains how after Cornelius' death ("Advanced Gay"), he had been without direction. He tells them he had been staying at the mansion for six weeks, taking care of the place and his half-brother without Pierce knowing about it. He apologizes for his clandestine behavior and turns to go but Pierce stops him. He asks that Gilbert move in with him and be his roommate, to which he happily agrees.

(Click HERE for a full gallery of Hawthorne Manor.)

Retrieved from "https://community-sitcom.fandom.com/wiki/Hawthorne_Manor?oldid=67410"
Community content is available under CC-BY-SA unless otherwise noted.