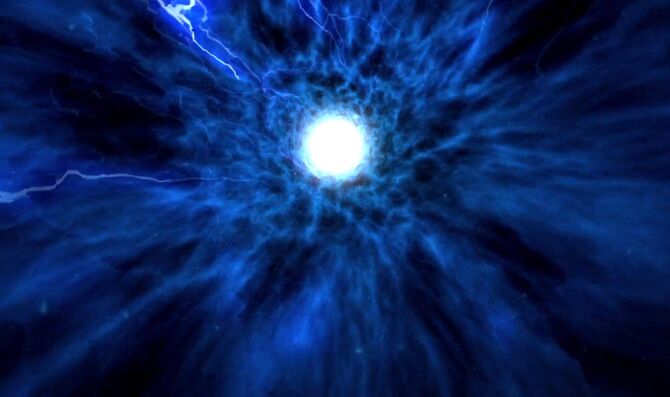 Another one of Abed's sitcom fantasies is shown. In this segment, he and Troy are cross dressing, so they can attend an "Antics 101" class that is only for women. They are stopped by Dean Pelton who admires their dresses and lets them inside. Britta tries to enter the class but is stopped by the Dean who insists she is male. Shirley opens the door to the class and says a catchphrase while looking straight into the camera.

"Hisotry 101" writer and Community Executive producer Andy Bobrow in an interview with Splitsider.com gave his own criticism of the episode:

“I [feel] we shouldn't have done that much stuff. When I look at it, the critiques that I'm anticipating are "This is a sign of new showrunners trying desperately to assure die-hard fans that we're still gonna be the same.”

“If we did it over again, I wouldn't have done a Troy/Britta story or a Shirley/Annie story. I would have lumped everyone into The Hunger Games, and just done those two stories. Some version of people competing to get into a class, paired with Abed seeing the world differently in multi-camera. It would have just made it two stories instead of five [LAUGHS].”

"History 101" had 4 million viewers and a 1.8 rating among adults 18-49, up 6 percent from its previous debut with "Biology 101" back in September 2011 and and up 38 percent from a 1.3 for the previous season finale "Introduction to Finality" on May 17("[Entertainment Weekly]")("[zap2it.com]]"). That was good enough to land them third in their time slot, trailing only "The Big Bang Theory" and "American Idol", which likely would have beaten almost any show on almost any night. On the Twitter, "Community" racked up a whopping 20 trending topics during the initial broadcast. Critic Brian Collins from Badass Digest noted the seeming disparity between the show's popularity and its ratings last year:

“So a joke at the end of the episode trended worldwide as it aired, yet the show had series low-ish ratings per Nielsen? Good system.” 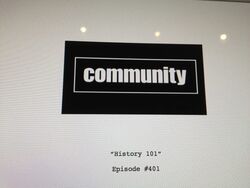 On August 7, 2012, Joel Mchale released a photo via his twitter account of the cover of the script for the first episode of Community Season Four which revealed the what subject the study group is taking in their final year at Greendale. On September 7, 2012, Entertainment Weekly revealed more details about the Season Four premiere hinting at the multiple outfits Dean Pelton would wear along with the tango he would do with Jeff. Various promotional material including a clip Joel McHale brought to his appearance on the Ellen show was released in anticipation of the October 19 premiere.

On October 8 NBC released an official statement that "Community" premiere would be changed to a date to be determined later. On October 30, NBC made the decision to have Season Four pushed back to next year and "History 101" was rescheduled to air on February 7, 2013.

“Hey! You can’t just walk in here. I’ve been pissing in jars for an hour trying to keep this seat.”— Leonard