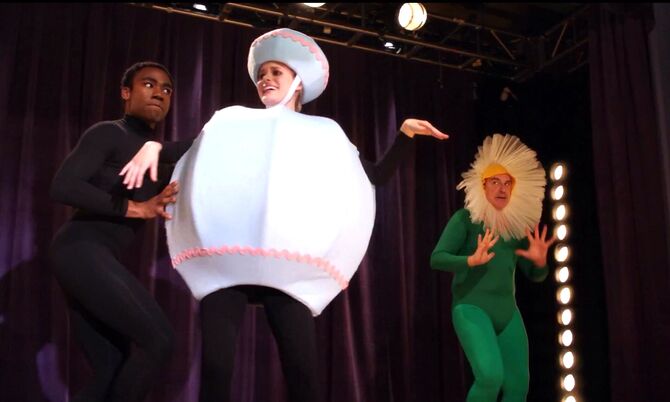 “If you like her why would you want to keep her a secret? Don't you want us to meet her?”— Annie
“We have an agreement to keep it low key.”— Jeff
“That's ridiculous. Obviously it's a guy.”— Pierce
“You're wrong, Pierce. It's two guys. Sometimes I do wish you were dead.”— Jeff
“Thank you.”— Pierce

“You know, we laugh, but the fact is student-teacher relationships do happen and they are a magnet for lawsuits so we do stay vigilant. In fact, physically attractive students and faculty are actually placed on a watch list and are ranked by their potential to incite fraternization.”— Dean Pelton
“You rank people by how hot they are?”— Jeff
“You got it. Number two.”— Dean Pelton
“Dean Pelton.”— Slater
“Yes, professor seven-uh Slater”— Dean Pelton

“You guys be extra careful, now. Two people of your rankings in this small room, with this type of lighting and, his upper body, and what her heels and hemline are doing to enhance what were already quite a few favors from God, it's all the more important to keep it tasteful.”— Dean Pelton

“Oh my god, How can you do this to me? I'm so disappointed in you”— Britta (after finding out that Troy won't be in the dance recital and is dropping the class)
“You don't get to talk to me like, You are not Shirley, and Shirley's not my mom.”— Troy

“Can I just ask as a divorced black housewife, what part of being a single, white, slacker makes you people so jaded?”— Shirley
“Ooooh! 'You people'?! What do you mean 'you people'?! Can not believe I got to say that.”— Britta
“It's the little things, isn't it?”— Shirley

“I got freaked out by that boyfriend label. I'm afraid of commitment.”— Jeff
“How original.”— Michelle Slater
“Look, the biggest truths aren't original. Truth is ketchup, it's Jim Belushi. Its job isn't to blow our minds, it's to be within reach. So the truth is, I get claustrophobic when things get official!”— Jeff}}

Retrieved from "https://community-sitcom.fandom.com/wiki/Interpretive_Dance?oldid=68146"
Community content is available under CC-BY-SA unless otherwise noted.