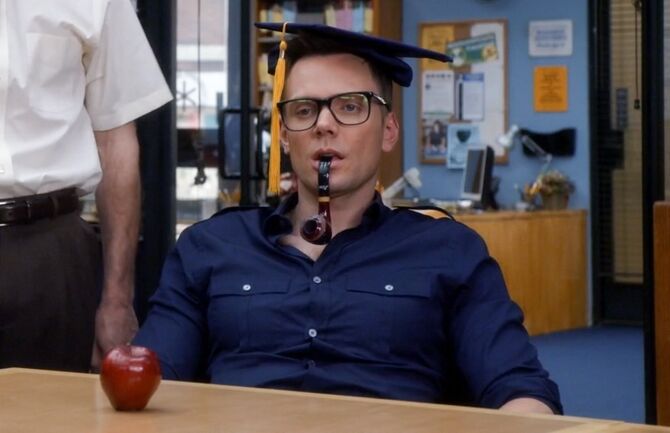 Introduction to Teaching
Table of Contents:

“There's a course on Nicolas Cage but if you mention Jesus to your science teacher you get a written warning.”— Shirley

“Okay, so, break into groups and then you guys quiz each other.”— Jeff
“Mr. Winger, is that really the best use of our time? Seems like the value of having you here is...”— Annie
“I think my value as a teacher is to teach you how to learn.”— Jeff
“I think you're telling us we should teach ourselves.”— Annie
“I don't think you're going to learn if I tell you how to think.”— Jeff
“I think if you tell us what you think then we'll learn that.”— Annie
“I thought you should break into groups. But you failed to learn that so your theory's invalid.”— Jeff

“Minuses are made up!”— Annie, yelling to the other students
“It's riot time!”— Fat Neil
“Bring me their heads!”— Garrett
“POP POP!”— Magnitude

“I know that it's unrealistic to think that we can eliminate riots completely, but I have been crunching the numbers and I believe we can reduce them by 40%.”— Dean Pelton

Retrieved from "https://community-sitcom.fandom.com/wiki/Introduction_to_Teaching?oldid=68053"
Community content is available under CC-BY-SA unless otherwise noted.