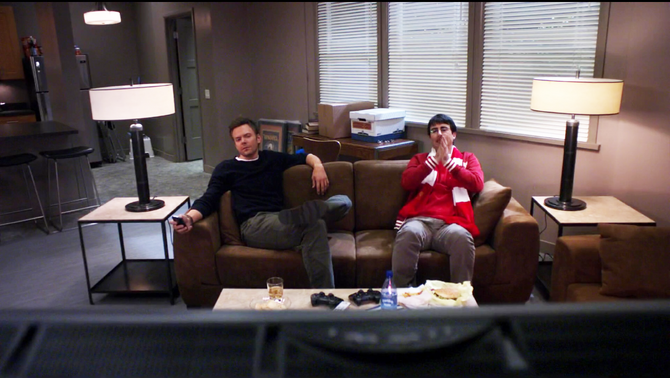 During Jeff's first year at Greendale, he struggled with his finances and was no longer able to afford the luxuries he had enjoyed whilst he was a high priced attorney. He was eventually forced to give up his expensive condo and settle for a much smaller apartment. The apartment made a brief appearance in the Season Two premiere "Anthropology 101" and was later fully seen in "Early 21st Century Romanticism".

In his first year at Greendale, Jeff was still getting used to the fact that he could not afford to live the expensive lifestyle he had enjoyed as as a lawyer. Although Jeff kept his cell phone and his car, he was unable to keep his beloved condo and was evicted. He ended up living in his car but, despite his circumstances, he still believed that he would be able to move back into his condo. After his car was towed he had no place to turn, and eventually moved in with Abed in his dorm room. Abed realized his place was having a negative affect on Jeff and asked Britta to convince Jeff to snap him out of his funk. Britta broke into his condo and stole Jeff's hand-crafted Italian faucets to inspire him to move on and install them somewhere else ("Home Economics"). Jeff took her advice and eventually found an apartment he could afford and moved in. He would later note that his new place as having a Spanish family downstairs that hates him ("English as a Second Language").

Jeff's apartment is seen for the first time in a brief shot of him doing hanging sit-ups in his bedroom ("Anthropology 101"). Later in the semester on Valentines Day, Ian Duncan invited himself over to Jeff's place to watch a Liverpool FC football game. Ben Chang learned about this and turned up uninvited with an ulterior motive. He turned the get-together into a large party and invited various students from Greendale (sans the study group), including Star-Burns, Leonard, and Magnitude. Using the party as a smokescreen, Chang attempted to sneak in his belongings and secretly move in with Jeff as he had been kicked out of his home by his wife due to his sexual encounter with Shirley. Upon learning of his plans, Jeff kicked him out and ended the party. However, a conversation with Duncan about accepting his time at Greendale made Jeff have a change of heart. When Jeff discovered Chang was still at his apartment complex inside the trash chute, he allowed him to stay at his place for a while ("Early 21st Century Romanticism").

Some time later, Shirley hoped Jeff could convince his then roommate, Chang, to waive any legal rights for her unborn child which she learned earlier could possibly be his. In an attempt to get him to move out, Jeff instead made Chang think that Shirley would allow him to be a part of the child's life if he got his act together. In order to prove he was father material, Chang picked up from school kids he thought were Shirley's children and brought them to Jeff's apartment. When he learned they were not Shirley's kids he kept that information from Jeff, who got angry at Chang and berated him for his reckless actions. When Jeff left the apartment with the boys to return them to their parents, Chang sent the police after him and got him arrested for kidnapping. With the help of Shirley and Andre, Jeff managed to have those charges revoked, although he ended up spending a night in jail ("Custody Law and Eastern European Diplomacy").

Jeff's apartment is not seen throughout his third year at Greendale. It's assumed Jeff kicked out Chang some time before the summer break as Chang was living in the school vents by the time the new school year started.

In December of his senior year, Jeff's apartment is featured prominently after he invites the study group and Chang/Kevin to a Christmas party. Annie reveals she invited their History professor, Noel Cornwallis, in the hopes of charming him into changing the grade of the group's history paper. The party degenerates into a kidnapping scenario after a misunderstanding from a supposedly amnesiac Chang results in him holding Cornwallis against his will by tying him to a chair. Jeff attempts to take advantage of the situation by extorting a passing grade for their paper whilst they have the advantage. In response, Cornwallis begins to play mind games with the study group and tries to get them to turn on each other. The tension-filled situation is resolved when it's revealed that Cornwallis had orchestrated the entire thing simply to amuse himself. Jeff then negotiates a passing grade from the professor for all the mental anguish he inflicted on them ("Intro to Knots").

Jeff's apartment complex is located at 10202 Thalberg Drive and his apartment number is 204. It appears to only have one bedroom, a small kitchen with a breakfast nook and a living room area. It's sparsely decorated with minimum furnishings, indicating a utilitarian approach to style. Although not particularly messy, it has a few unopened boxes suggesting Jeff has still not unpacked everything from his old living space. There are also few photos or pictures on display.

The ZIP Code displayed on the driver's license "80022" is the postal code for Commerce City, Colorado; a suburb of Denver, CO.

Other noteables: The card which Chang returns to Jeff at his apartment in Season Two is a "Class C" license (Non-Commercial Class C license is the standard license class issued in the state of Colorado. There is a Class C Commercial license, but A and B are vastly more common) with license number "73628340G" and shows Jeff's birthday is November 20, 1971.  It lists he has blonde hair and blue eyes.

Retrieved from "https://community-sitcom.fandom.com/wiki/Jeff%27s_apartment?oldid=70740"
Community content is available under CC-BY-SA unless otherwise noted.