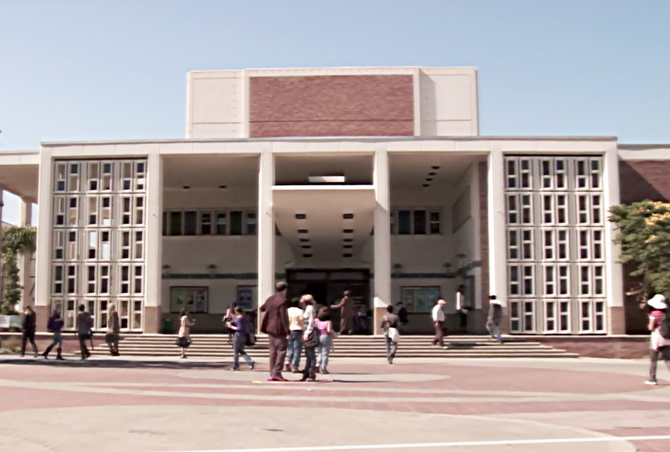 The Greendale library is the learning resource center for the campus. It provides access to information not just from books but also from a wide range of formats including videos, tapes, computers, and other media. It also has several study rooms available to the student body to hold study sessions or any other type of group meeting or informal get-together. It is staffed with librarians such as Mariah and student volunteers such as Todd. Its first appearance is in the "Pilot".

The library has several study rooms including the study group's meeting area Group Study Room F. Among the rows of bookcases, there's an area of small cubicles and desks available for individual studies. Outside the library, tables, benches, and vending machines can be found. The library's back entrance is in front of Borchert Hall.

The backdoor to the library is actually the exterior of Stage 30 and 31 at Paramount Studios where Community was originally filmed. The building shown in outside shots representing the front of the library is found on the real life campus of Los Angeles City College. This location is used for the majority of exterior shots of Greendale Community College.

Retrieved from "https://community-sitcom.fandom.com/wiki/Library?oldid=60532"
Community content is available under CC-BY-SA unless otherwise noted.