In the study group's first year at Greendale, Vaughn Miller asked Pierce to join his band as a keyboard player. They soon had a falling out over credit given for the song "Gettin' Rid of Britta" resulting in Vaughn kicking Pierce out of the band. Later at the campus music fest called A Night under the stars, Vaughn and the rest of his band debut his latest single "Pierce You Are A B" which features a rap performed by MC Dan Harmon mocking Pierce: 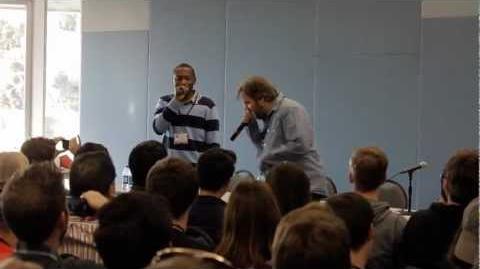 The character MC Dan Harmon is obviously named after the creator of the show, Dan Harmon. He is portrayed by rapper Jacques Slade who has composed not only the raps in the episode "Home Economics" but also the songs "Night Caps" and "I Never Die". His work on the show can be found on the Community soundtrack. At the 2013 CommuniCon, Jacques Slade and Dan Harmon performed "Pierce Raps" together.

Retrieved from "https://community-sitcom.fandom.com/wiki/MC_Dan_Harmon?oldid=61807"
Community content is available under CC-BY-SA unless otherwise noted.