Community Wiki
Register
Don't have an account?
Sign In
Advertisement
in: Season 2 Episodes, Community Episodes, Shirley and Abed,
and 2 more 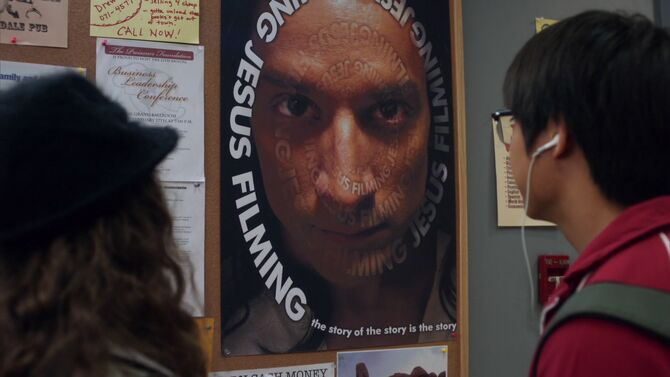 Frequent background extras Long haired guy and Jeremy make another of over 65 and 45 episode appearances respectively. Both are in numerous hallway and Anthropology 101 class scenes. Long haired guy is behind Troy and Abed when all are watching the Youtube videos in class, is behind the hipsters in the cafeteria and, is in the crowd when Abed does his crane shot.

“This subject's lack of definition cuts both ways. If farts are fair game, so is God.”— Professor Duncan "teaching" Anthropology

“Oh, hey, yeah, wooo, it's meta now. 'Cept here's the thing: I'm a devout Christian and you guys are feeding into this poor boy's delusions.”— Shirley
“It's so cool. She's an actual real life Pharisee.”— Eric
“Hey, bitch. Why don't you go back to your temple.”— Red headed girl

“Leonard? You're hanging out with Leonard? You know I hate him.”— Jeff
“Everybody hates him, that's why he's cool.”— Pierce
“I'm not sure that I want to get it. Take a break from these new friends of yours. They've got you riled up.”— Britta
“That's what Leonard said you'd say.”— Pierce
“Well, Leonard is not a part of this study group. So you apologize right now to... What? I'm not your father.﻿”— Jeff