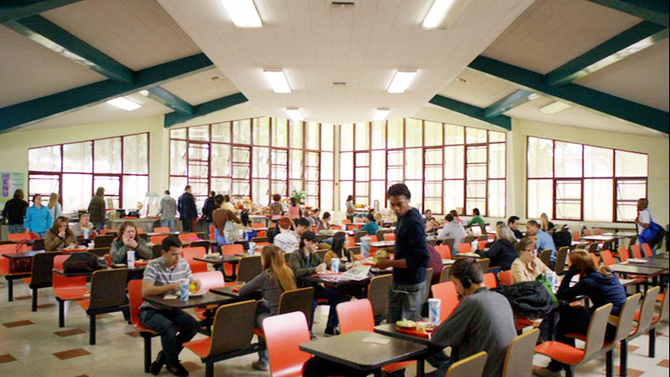 The cafeteria is the main dining hall for the students and faculty of Greendale Community College. The study group regularly gathers here for lunch along with the other students. It is officially called the North Cafeteria after Admiral William North and is located on campus in the western portion of the east hall. It is a large facility equipped with enough tables and chairs for over a hundred students. The dining area is situated in front of two large walls of windows that give a nice view of the campus. It has a cafeteria staff, a sandwich shop, and connects directly to the student lounge. The cafeteria's first appearance was in the premiere episode of Season One and has been featured in almost every episode since then.

Although its main function is to provide food services, it has also been utilized for other activities, such as a showroom for fairs ("The Politics of Human Sexuality"), an auditorium for student performances ("Regional Holiday Music"), and as a place to hold school dances ("Pascal's Triangle Revisited"). "Hot & Brown" was a popular coffee shop once located inside the cafeteria until Chang accidentally burned it down ("Competitive Ecology"). It was later replaced by a Subway franchise ("Digital Exploration of Interior Design"), which was in turn replaced with Shirley's Sandwiches ("Introduction to Finality"). It also has an entrance to the student lounge and the school store "Pencils and Such". In the 2015 semester, the cafeteria's ceiling collapsed, and the cafeteria was redesigned to include load-bearing columns when the roof was repaired ("Ladders").

The Greendale cafeteria has employed a number of workers, a few of which are familiar faces at the school. 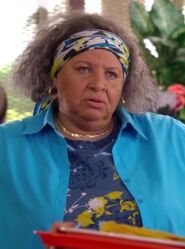 Cafeteria lady
During Jeff's first week, he approached Britta in the cafeteria to flirt. After she blew him off, the cafeteria lady walked up, and he joked that he thought she was his cosmic mentor because he was conditioned by television to think that all African American women over fifty are cosmic mentors. She then asked him if he was conditioned to pay for his lunch.
First appearance: "Pilot"
Portrayed by:
Patricia Belcher 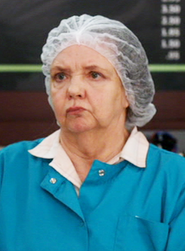 Lunch Lady
This cafeteria server was called a deaf mute by Pierce for not responding to him after he asked her about Chicken Fingers. It turns out she just had throat surgery and couldn't speak. After Star-Burns was fired as fry cook she posts a help wanted sign that is immediately taken down by Shirley. In Season Two, she denies Jeff a helping of macaroni and cheese because of how he treated Britta at the Tranny Dance.
First appearance:
"Contemporary American Poultry"
Portrayed by:
Sarah Van Horn 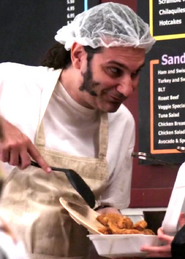 Star-Burns
Position: Fry cook (fired)
Star-Burns was the cafeteria fry cook and abused his position by making sure only a select few got the coveted chicken fingers. Jeff and the study group got him fired and replaced him with Abed who becomes corrupted. Star-Burns later gives Jeff a key which grants him access to destroy the deep fat fryer.
First appearance:
"Spanish 101" (as student), "Contemporary American Poultry" (as fry cook)
Portrayed by:
Dino Stamatopoulos 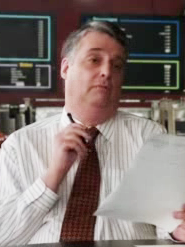 Food Service Manager
The Food service manager was forced to fire Star-Burns when a story by the school newspaper showed him abusing his power as fry cook. He then interviewed several candidates for the position and was greatly impressed with Abed Nadir's resume. Troy's interview disturbed him, however, as he showed up in costume dressed like a pharaoh.
First appearance:
"Contemporary American Poultry"
Portrayed by: Tom Lent 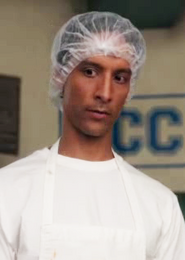 Abed Nadir
Position: Fry cook (quit)
After seeing how Star-Burns the fry cook was skimming chicken fingers for his friends, Jeff got him fired and replaced him with Abed. This leads to Abed creating an elaborate mafia style distribution network with him at the head of the organization, currying favors from the student body in exchange for chicken fingers. After Jeff convinces him he went too far, he quits.
First appearance:
"Pilot" (as student), "Contemporary American Poultry" (as fry cook)
Portrayed by:
Danny Pudi 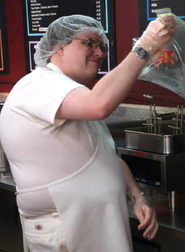 Garrett
Position: Fry Cook
Garrett is hired to replace Abed when he quits. He is shown taking a bribe from Leonard in the form of a bag of goldfish for a share of Chicken Fingers.
First appearance:
"Social Psychology"
Portrayed by:
Erik Charles Nielson 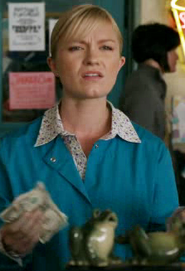