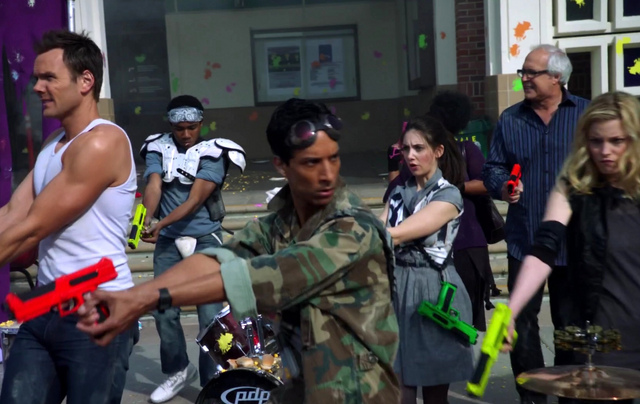 The Paintball Assassin games are annual competition events held towards the end of the school year at Greendale Community College. A prize is given to the winner of the contest which normally has great value to the students (with the exception of the time when the prize was simply tickets to see a musical) . The Paintball game first appeared in the Season One episode "Modern Warfare" and made subsequent appearances in the Season Two episodes "A Fistful of Paintballs" and "For A Few Paintballs More", in a flashback from the Season Three episode "Curriculum Unavailable", in a daydream from the Season Four episode "Advanced Introduction to Finality" and finally in the Season Six episode "Modern Espionage".

In the study group's first year together at Greendale, Dean Pelton announced a paintball contest was to be held with a prize to be announced later. Jeff was uninterested and annoyed at being grilled about his relationship with Britta. He left to go sleep in his car only to awaken an hour later to find the campus desolate. At the library he encountered a panic stricken Garrett and was chased by a paintball gun wielding Leonard. Jeff was saved by Abed and joined him and Troy in an alliance after learning the prize was Priority registration. The trio eventually reunited with the rest of the study group. However, battles with the Glee Club and "Disco Stu"'s roller skaters whittle the group down. Only Jeff and Britta were left as the two get swept up in the moment and consummated their relationship. In order to prevent anyone from actually winning the prize, Dean Pelton sent an experienced paintball player Ben Chang to finish off the remaining students. His final targets were Jeff and Britta who he tracked down in the study room. He engaged Britta in a one-on-one paintball gun duel which resulted in them both being eliminated. Jeff won by default and armed with Chang's paintball gun, went to the Dean's office to claim his prize.

A second paintball tournament was sponsored by Pistol Patty's Cowboy Creamery. This time, the game had a western theme and Paintball pistol were used in place of the paintball guns from last year. The winner was to receive $100,000 dollars and the students once again trashed the campus to win the prize. With paintball ammo supplies dwindling, the study group finds a cache of last year's previous paintball gun's and paraphernalia in the Dean's office. When the true sponsor of the game is revealed to be Dean Spreck from City College, the remaining Greendale participants of the game band together in an alliance to face off against the invading City College Storm Troopers. Abandoning the pistols, they use the paintball guns found in Pelton's office for the remainder of the conflict. Troy took command of a covert team to lure some of the City College troopers into a trap in the library. Jeff led a squad of students on a suicide assault the Paintball gatling gun on the campus quad.

Prize: Tickets to the musical "Chicago" at Greendale Civic Center.

In the study group's fourth year at Greendale, Jeff had earned enough credits to graduate early. He had some trepidations about leaving his life at Greendale and returning to his career as a lawyer. These fears led to Jeff having a daydream involving the Evil Study Group crossing over from the Darkest Timeline to the real world. In his imagination both versions were armed with hi-tech paintball weaponry that could teleport people to the parallel "evil" world. Jeff's scenario had both versions of the study group having a paintball showdown in the cafeteria. Once the battle was over the evil doppelgängers were all vanquished back to their reality. Jeff snapped out of his daydream which helped him to overcome his fears over leaving Greendale and his friends ("Advanced Introduction to Finality").

Onscreen eliminations
By the time Jeff's daydream ended, only he and Abed were left standing.

In the 2014-2015 semester at Greendale, paintball was banned on the Greendale campus due to a new initiative spearheaded by the school's consultant Frankie Dart. Evidence surfaced that an underground paintball tournament had been organized due to incidents occurring like Starburns and Todd battle in the parking garage. Frankie pleaded with Jeff to use his influence as the unofficial BMOC of Greendale to put an end to the illegal contest. Jeff tried to get the rest of the committee onboard but learned they were competing as well. It was only after Abed pointed out that City College was covertly sponsoring the contest and the prize money that everyone agreed to unravel the conspiracy.

They started by investigating the rival university's undercover agent "Silverballz" and discovered he was going to strike at the black tie gala event Frankie put together. After Dean Pelton narrowly avoided bring eliminated he discovered that the Greendale custodians were in cahoots with City College. They were led by Lapari whose men charged the cafeteria and opened fire. Once the battle was over, only Lapari, Jeff and Dean Pelton were left still in the game. A Mexican stand-off occurred which was interrupted by Frankie who convinced Lapari of her good intentions and that he wouldn't be fired over the incident. The competition officially ended when Lapari, Pelton and Winger shot each other at the same time. As they had all been eliminated simultaneously, none of them received the prize money ("Modern Espionage").

Save Greendale Committee (Jeff, Abed, Annie, Britta and Elroy) with the exception of Frankie; Lapari and the custodial staff, the cafeteria staff, Dean Pelton, Ben Chang, Todd, Star-Burns, various Greendale students and guests at the gala.

Onscreen eliminations
No winner
Prize: An undisclosed sum of money

Retrieved from "https://community-sitcom.fandom.com/wiki/Paintball_Assassin?oldid=70341"
Community content is available under CC-BY-SA unless otherwise noted.