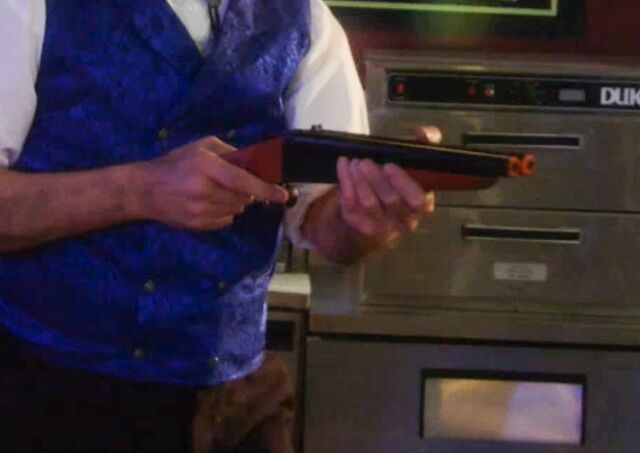 The paintball shotgun is the weapon of choice for The Black Rider, a mysterious participant of the 2011 Greendale Paintball games. In keeping with the western theme of the contest, it's a version of the double barrelled coach gun made famous in the Old West. It sacrifices accuracy and long range for power and is very effective up close. He carried two of the firearms and had them both strapped to his back along with two crisscrossing bandoleers that held the shotgun shell ammunition for the weapons. The Black Rider would often dual wield the shotguns during the competition to maximum effect earning himself a fearsome reputation. The paintball shotgun's first appearance was in the Season Two episode "A Fistful of Paintballs".

The paintball shotguns featured in the episode "A Fistful of Paintballs" were air soft guns manufactured by a company known as Hwasan. They are officially known as the "Hwasan MadMax Sawed Off Shotgun". As with most air soft firearms they can be used to fire specially designed paintball pellets but they are not as effective as dedicated paintball guns and aren't allowed for use in official paintball matches. It is crafted as an almost exact replica of a real shotgun and has the same advantages and disadvantages when used in Airsoft competitions. It usually retail for around $130.

Retrieved from "https://community-sitcom.fandom.com/wiki/Paintball_shotgun?oldid=60324"
Community content is available under CC-BY-SA unless otherwise noted.