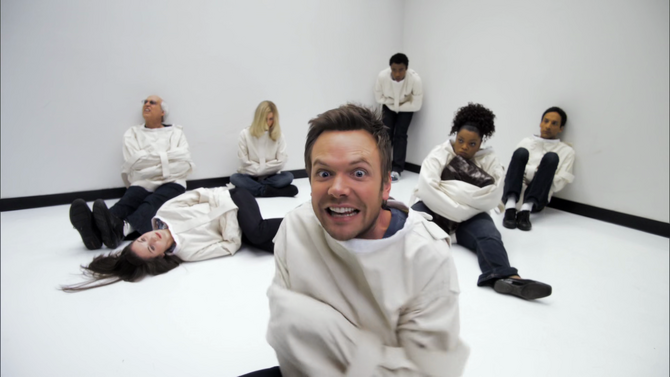 “Didn't we decide, at the beginning of the year that, for the good of the group, we wouldn't allow any intimacy between each other or ourselves?”— Troy
“Troy, we never said 'ourselves'.”— Jeff
“...Okay, now I'm really mad.”— Troy

“Dean-a-ling-a-ling. I was just heading to judge our belated carnival when I heard you guys having a tiff. What's the rumpus?”— Dean Pelton
“We were debating how many times per year a man can drop in a study room in a dumb costume with irrelevant news.”— Jeff

“Abed, stop being meta! Why do you always have to take whatever happens to us and shove it up its own ass?!”— Jeff

Retrieved from "https://community-sitcom.fandom.com/wiki/Paradigms_of_Human_Memory?oldid=71296"
Community content is available under CC-BY-SA unless otherwise noted.