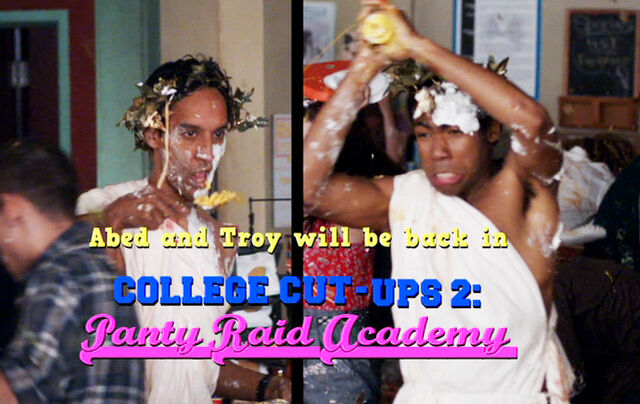 ♫Party Where Your Heart Is

In the study group's first year at Greendale, Jeff and Britta encounter a trio of annoying teens named Mark, Kelly and Scott. They mocked the pair for attending community college at their age and would continue to taunt them around campus. In a last ditch attempt to get some payback, Jeff challenged Mark to a mocking contest. Britta and the other teens joined in but it was clear the teens would win the contest. Shirley and Pierce stepped in and depantsed Kelly and Mark leading to Jeff and Britta's "victory". In response, the teenagers started a food fight in the cafeteria throwing food at Troy and Abed. The rest of the student body quickly joined as the as the song "Party Where Your Heart Is" played over the chaos. The song is also played in the Season Three episode Curriculum Unavailable; it is heard in the background during the scene in which Jeff offers his jacket to Annie.

I don't like studyin'
I like partyin'
I don't wanna read a book
unless the subject is beer or boobs and not pencils and books
Next semester hasn't started
until you've partied where your heart is
I dont wanna take a test
unless the question is "where's the party?" and the answer is "me!"
Why did my father always lie?
I hate science
unless it helps you build a robot
Specifically the kind programmed
to find another party so I can skip chemistry
College is a party
so come party at the party
Party is a class in session
and the only lesson is to party when you party with me

The song is inspired by the classic movie cliches of students wild partying all the time at school, the basis of many college oriented films.

Retrieved from "https://community-sitcom.fandom.com/wiki/Party_Where_Your_Heart_Is?oldid=47144"
Community content is available under CC-BY-SA unless otherwise noted.