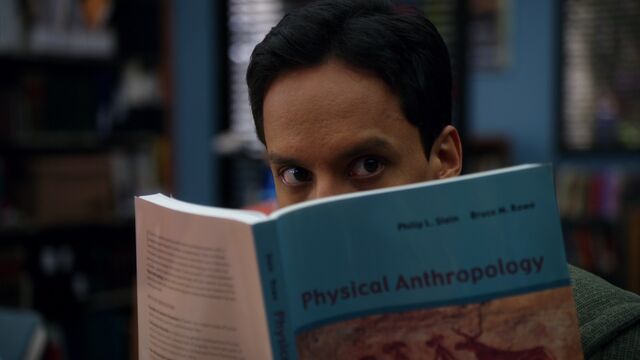 "Anthropology 101": The Study Group brings the text to their first day of class.

"Messianic Myths and Ancient Peoples": Professor Ian Duncan tells the class to open their text books because Abed has broken the internet.

"Early 21st Century Romanticism": Troy and Abed hide behind their Anthropology textbooks while checking out the school's librarian Mariah.

"Intro to Political Science": After the group finishes conversing and with nothing else to do, Britta suggests that the study group actually study Anthropology. They all open up their Anthropology text books but are unsure of where to start reading as their books hadn't been used much during the semester.

Retrieved from "https://community-sitcom.fandom.com/wiki/Physical_Anthropology?oldid=58113"
Community content is available under CC-BY-SA unless otherwise noted.