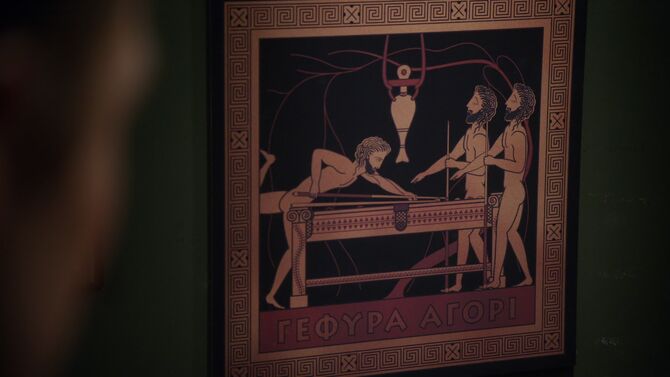 Troy and Abed are role playing as Bert and Ernie from Sesame Street until Troy remembers that he has to attend a funeral for his cousin. In the Community The Complete First Season DVD commentaries, Donald Glover mentions that this bit was Yvette Nicole Brown's idea.

“It's just like the Notebook, only instead of Alzheimer's, Abed has [Shirley clears her throat so that Annie doesn't say "autism"] ... someone who likes him.”— Annie

“Nobody here is "Can't Buy Me Love"-ing or "Love Don't Cost A Thing"-ing anyone because we've all seen enough after school specials [off Shirley and Troy's confused looks] and Fat Albert [Shirley and Troy nod in understanding] to know that Abed only needs to be himself.”— Jeff

“Yes Abed, you need to be someone else. Someone who eventually gets a girlfriend because I can't think of anything more frightening than a half-Polish, half-Arab virgin in his thirties. One way or the other, that story ends with an explosion.”— Pierce

“The truth is lots of girls like me because let's face it: I'm pretty adorable. And my aloofness unconsciously reminds them of their father, so I'm more used to them approaching me.”— Abed
“So we didn't damage your self esteem or anything?”— Britta
“Britta, I've got self esteem flowing out of my butt. That's why I was willing to change for you guys because when you really know who you are and what you like about yourself, changing for other people isn't such a big deal."”— Abed