“Pierce you've found this CD which means...I'm dead. ”— Pierce's mom
“Vaporized.”— Pierce
“I'm not vaporized. I'm gone Pierce...gone forever, and that's how I like it. Life is only worth a damn because it's short. It's designed to be consumed, used, spanked, lived, felt. We're supposed to fill it with every mistake and miracle we can manage and then we're supposed to let go. I can't force you to do that for yourself Pierce, but you can't force me to stay...and if you unscrew the top of that stupid thing, you'll see it was made in China. I love you son. Goodbye.”— Pierce's mom 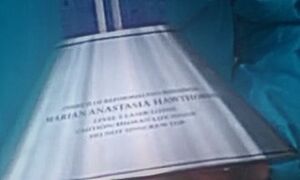 Mrs. Hawthorne's name has never been spoken on the show, however the Energon Pod that supposedly houses her spirit has a metal base inscribed with the full name Marian Anastasia Hawthorne. The name itself has not been officially canonized but Pierce's middle name was also revealed to be to be "Anastasia" in the Season Three episode "Advanced Gay".

Retrieved from "https://community-sitcom.fandom.com/wiki/Pierce%27s_mom?oldid=70838"
Community content is available under CC-BY-SA unless otherwise noted.